Ovulation is the time when an egg or ovum is released by female ovary, usually midway during the menstrual cycle.

Ovulation is the phase of menstrual cycle that involves release of an egg or ovum by a mature female ovary. It usually occurs midway during the menstrual cycle. About once in a month, an egg matures in the ovarian follicle and is released by one of the ovaries. The released egg travels through the fallopian tube and, if a male sperm happens to be present in the tube, fertilization of the egg occurs and that's how a woman conceives. 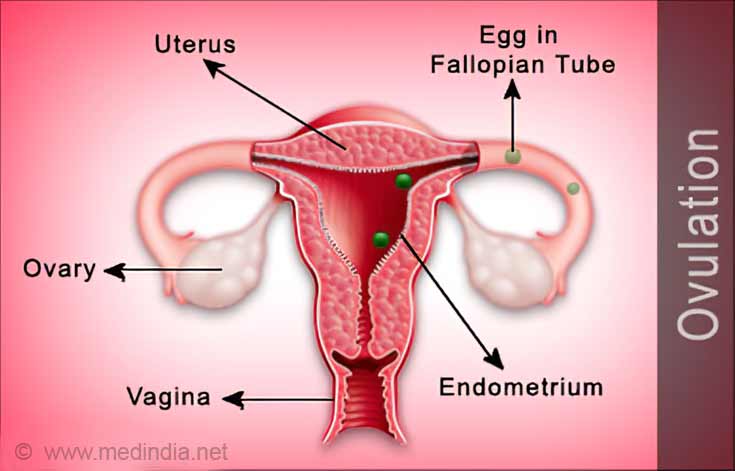 The process of ovulation is under control of a small gland in the brain called pituitary, which is in turn controlled by the hypothalamus. Hypothalamus sends signals to the pituitary gland to secrete luteinizing hormone (LH) and follicle-stimulating hormone (FSH). The sudden surge in the level of these hormones triggers ovulation. Ovulation occurs between 10th and 19th day of menstrual cycle and this is the time when females are most fertile.

The entire menstrual cycle is divided into three phases:

a. Periovulatory or follicular phase: The follicular phase begins with the first day of menstrual cycle and lasts about 10 to 14days. During this phase, the hypothalamus stimulates the pituitary gland to release FSH. FSH stimulates development of follicles in the ovaries. A dominant follicle increases in size and produces the egg. It also increases the estrogen levels in the body.

b. Ovulatory phase: This stage is characterized with the release of an egg from the dominant follicle. Rise in estrogen levels stimulates the pituitary gland to secrete LH. The LH surge causes the mature follicle to release its egg. This process is called ovulation.

c. Postovulatory phase or luteal phase: Luteal phase is the phase that follows ovulation. The empty follicle that released the egg transforms to corpus luteum and secretes a hormone called progesterone. If the egg is fertilized by the sperm, it gets implanted in the inner lining of the uterus. If not, the levels of progesterone decline, causing breakdown of lining. This again marks the beginning of bleeding.

"The Stones of Women (for they have such kind of toys as well as men) differ from the Stones of men for they are within the Belly in Women, but without in men. The use of the Stones in Women, is the same that they are in Men, viz. To concoct seed."- Nicholas Culpeper, 1660

Latest Publications and Research on Ovulation

Pregnancy Confirmation Calculator
Are you pregnant? Use Medindia's simple and useful calculator to find out whether you are pregnant or not.

Premenstrual Syndrome
Premenstrual syndrome or PMS is a medical condition characterized by a range of physical and emotional symptoms before onset of menstruation.

Quiz on Ovulation
Ovulation is a natural phenomenon that forms part of the female reproductive cycle. Hence, problems with ovulating not only make conception difficult, but also cause unneeded physical and psychological difficulties to women. To understand how ...

Assisted Reproductive Technologies
Assisted reproductive technologies include all measures involving the manipulation of gametes and embryo outside of the human body to help a couple conceive.

Top Foods To Improve Fertility
A balanced diet has various benefits and one of them is healthy reproductive system. Learn about the foods and lifestyle habits that can boost your fertility.
Sign up for Wellness Consult a Doctor Sign up for Selfcare
Advertisement
Health Topics A - Z
A B C D E F G H I J K L M N O P Q R S T U V W X Y Z