The body requires several essential minerals for performing various physiological functions. Potassium derived from Latin word Kallium is an electrolyte required by the body. It helps to maintain the intracellular osmotic pressure and plays a major role in transmission of nerve impulses. It is important for the proper biosynthesis of protein.

Potassium that is present outside the cells influences the activity of the heart. Meat, milk, sweet potato, nuts, beans, salmon and fruits like banana are rich sources of potassium. The Normal Plasma Potassium level is 3.5 -5.5 meq/L (milliequivalent per liter). 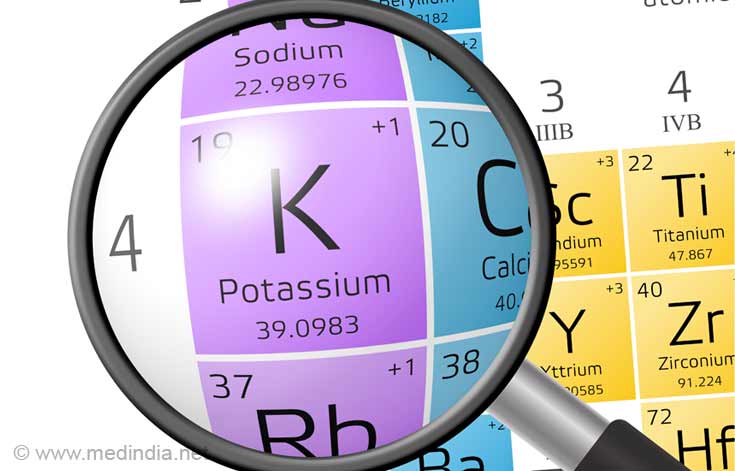 What are the Drugs that Increase Serum Potassium Level?

ACE inhibitors are commonly used in the treatment of hypertension, heart failure, heart attack and diabetic nephropathy (kidney disease due to diabetes). Drugs like captopril, enalapril, lisinopril, perindopril, fosinopril, trandolapril, ramipril, imidapril and benazepril are ACE inhibitors. They prevent the conversion of the hormone angiotensin I to angiotensin II in the body. This results in decreased levels of another hormone aldosterone which is responsible for the proper excretion of potassium, thus resulting in hyperkalemia. 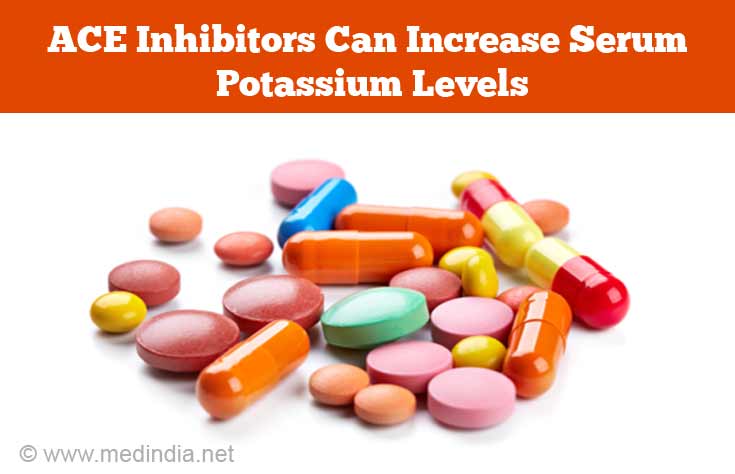 Angiotensin receptor blockers are similar to ACE inhibitors and are also associated with hyperkalemia. They block the effect of angiotensin II on its receptors. Commonly used angiotensin receptor antagonists include losartan, candesartan, irbesartan, valsartan and telmisartan. They are also used in the treatment of high blood pressure, cardiovascular and kidney diseases.

Diuretics are drugs that bring about excess excretion of water and electrolytes through the urine. Several diuretics cause loss of potassium. To prevent this, potassium-sparing diuretics are sometimes used. Common potassium-sparing diuretics include amiloride, spironolactone and triamterene. However, under certain conditions like kidney disease, these drugs can cause excess retention of potassium, resulting in hyperkalemia. Spironolactone acts as an aldosterone antagonist. It is useful in the treatment of cirrhotic and nephrotic edema (accumulation of excess fluid due to liver or kidney disease), heart failure and high blood pressure.

Drugs that inhibit an immune response are known as immunosuppressants. Drugs like Cyclosporine and Tacrolimus mainly act by inhibiting a specific protein called Calcineurin and hence known as Calcineurin inhibitors. These drugs act by inhibiting the proliferation of specific T cells in the immune system. Their major use is in the treatment of autoimmune diseases like rheumatoid arthritis, asthma, dermatomyositis (inflammation of the skin and underlying muscle) and in organ transplantation. Some drugs like cyclosporine cause damage to the kidney. Cyclosporine when given to patients who take potassium supplements and potassium-sparing diuretics can cause hyperkalemia. 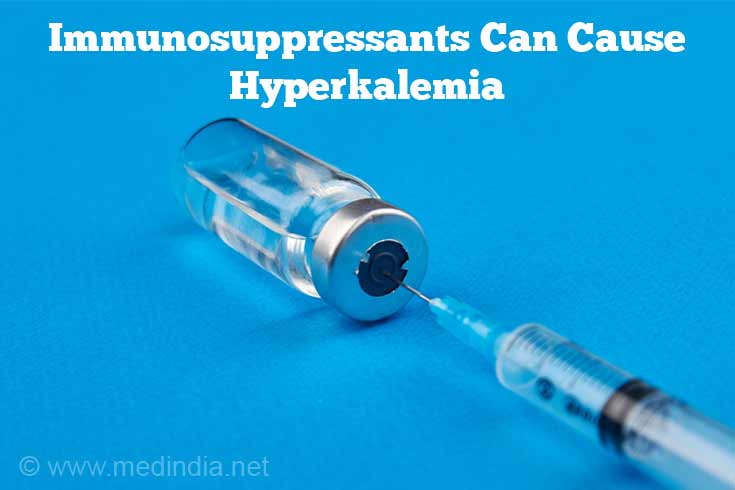 NSAIDs are painkillers which reduce fever and inflammation Aspirin, paracetamol, ibuprofen, naproxen, diclofenac, celecoxib are some of the commonly used NSAIDs. Selective Cyclo oxygenase (COX 2) inhibitors like celecoxib, etoricoxib, parecoxib mainly act by inhibiting the cyclo oxygenase enzyme and possess a high risk of increased serum potassium levels when compared to other non selective NSAIDs. These drugs can cause hyperkalemia and should be used with caution in individuals prone to high potassium levels.

Other drugs like pentamidine, digoxin, heparin and derivatives may also lead to hyperkalemia.

What are the Symptoms of Hyperkalemia?

Symptoms of hyperkalemia are as follows: 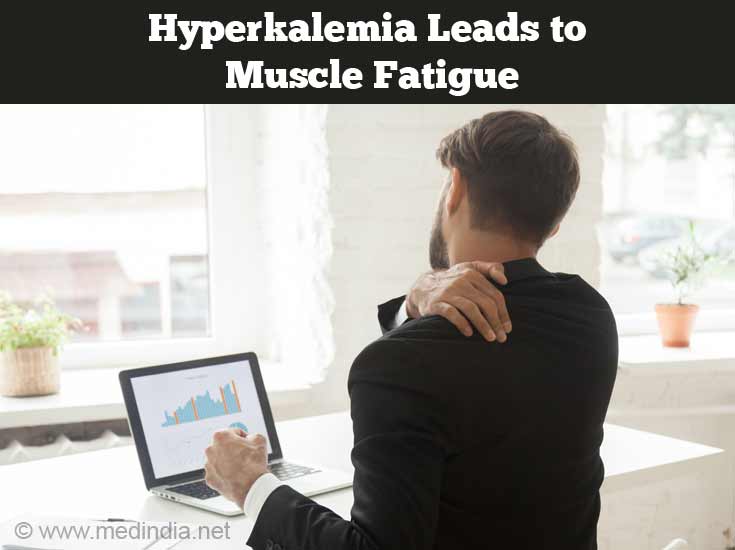 What is the Treatment and Preventive Measures for Hyperkalemia?

Hyperkalemia is a life-threatening condition that can lead to disturbances in cardiac rhythms which can be fatal, therefore treatment should be initiated as soon as possible. Treatment for hyperkalemia mainly involves:

Antagonizing the Effect of Potassium on Cell Membrane

10 ml of calcium chloride or calcium gluconate for injection is given intravenously for 10 minutes to antagonize or oppose the effects of potassium on the heart. The electrocardiogram (ECG) is carefully monitored and the onset of action was found to be less than three minutes.

Redistributing the Extracellular Potassium into the Cells

Rarely, drugs like terbutaline are also used along with insulin in the nebulized form or by intravenous infusion due to its additive effect.

Enhancing the Elimination of Potassium from the Body

Loop diuretics with high efficacy like furosemide (40-80 mg IV) and bumetanide (2-4 mg IV) are given to increase potassium elimination.

Hemodialysis is consistently helpful in removing the excess potassium in patients with renal failure. 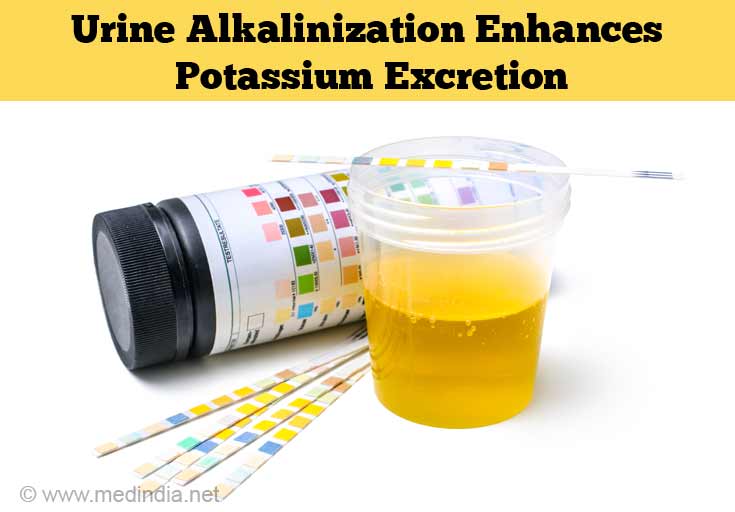 Hyperkalemia due to medications can be prevented by monitoring the serum potassium level in susceptible patients from time to time by:

Diabetics Benefit With Food Rich in Potassium Are you diabetic? Consuming a diet rich in potassium may help you protect your kidney and heart, states a new study.

Potassium and High Blood Pressure People who substitute sodium based salt with potassium based salt or rack salt have lower blood pressure.

Potassium Rich Foods Eat more potassium rich foods and lower your risk for high blood pressure and kidney stones. Potassium is an important dietary mineral and electrolyte that is obtained from food we eat.

Hypokalemia Hypokalemia refers to a decreased potassium level in the blood below 3.5 mEq /L. It can be life-threatening unless promptly reversed.
Sign up for Wellness Consult a Doctor Sign up for Selfcare
Advertisement
Health Topics A - Z
A B C D E F G H I J K L M N O P Q R S T U V W X Y Z