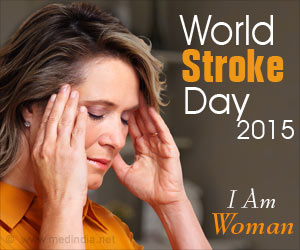 The World Stroke Day 2015 is being celebrated on the 29th of October 2015. As with last year, this year too World Stroke Day focusses on increasing education and awareness regarding stroke mainly in the women population.

A brain stroke may affect only one family member, but it disrupts the entire family. Life after a stroke is difficult, especially since the disability can last for a lifetime. Stroke results in loss of productivity, necessitates a caregiver for the patient, and has a huge economic impact on the family, the society and the state as well. Most of us think that stroke is something that will not affect us. However, statistics are quite alarming. According to the World Stroke Organization, every six seconds, one person in the world is disabled due to stroke, and one person dies of stroke. That one person could be anyone!!


What Causes a Stroke?

Not all strokes are of the same type. Some are caused by a bleed in the brain, which may be due to very high blood pressure. Others are caused by a clot, which may obstruct blood flow, therefore depriving part of the brain of an adequate supply of oxygen and glucose, leading to death of the localized part. It is important to differentiate between the types of stroke, since the treatment varies. However, despite treatment, many people may not achieve full recovery.


‘Focus of World Stroke Day 2015 is on women as they are at a higher risk of stroke then men and are more likely to die of it. To recognize stroke early follow the acronym FAST’

The campaign is a reminder that women are more likely to suffer from stroke and are also more likely to die from it. One in five women are at a risk of suffering from stroke, while one in six men suffer from the same risk. Factors that make a woman prone to stroke include:
Women are also indirectly affected by stroke that strikes the men of the family. They often have to take up the role of caregivers and sometimes support the family financially as well.

Prevention of Stroke - Preventing a stroke is not very difficult. A regular check-up can identify risk factors, which can be treated well before they cause stroke. The physician should be specifically asked to evaluate your risk for stroke, so that medications to prevent it can be taken early. In addition, simple lifestyle changes can help to keep stroke at bay:
Following these simple guidelines will prevent not only stroke but several other problems like diabetes, heart disease and other health related problems.

Though the theme for the World Stroke Day is focused on women, it should be remembered that men are also affected by stroke. Preventive measures should also be adopted by men, who are often the breadwinners of the family.

If a stroke is recognized and treated immediately, chances of brain damage will be minimal. There is an acronym FAST that helps to recognize signs of an evolving stroke and reminds to call for immediate help. Stroke FAST:

F- Face - drooping of one side of the face is noted

A- Arms - On raising the arms, one side appears weak

A song based on these signs is also available on the American Stroke Association website. After all, singing is an effective way of conveying a message.

Several events are being organized all over the world to increase awareness about stroke.

You could do your bit by increasing awareness among social networking sites. Understanding the facts regarding stroke can result in a better and longer life for several people.
References : 1. http://www.worldstrokecampaign.org/