Stroke is a moniker that strikes fear in the mighty and the meek alike.

Many of us have seen or heard about people whose lives have been devastated by a Stroke! Maimed for life, these individuals exist in a twilight zone, suspended between life and death. What is Stroke? Its early warning signs, risk factors and how to rehab and treat these patients. Read on. 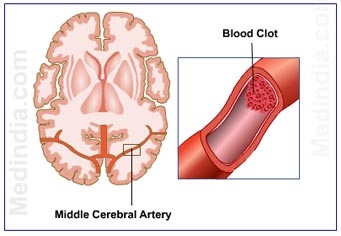 Typically there are two types of stroke-Ischemic and Hemorrhagic. The former is the most prevalent type (88%) and occurs due to a clot in an artery supplying blood to the brain. The latter (12%) is caused by a leak in a blood vessel supplying the brain. This results in profuse bleeding inside the brain.

Early warning signs of stroke are important to recognize as they are often missed. These include -

Every second is important and seeking help early can prevent permanent damage from occurring.

Transient Ischemic Attack (TIA) also known as "mini stroke" results from a temporary cessation of blood supply to a limited part of the brain. This results in a short term neurologic dysfunction that lasts for, approximately, less than 24 hours. If the symptoms exceed the cut- off time the episode is classified as a stroke.

In the United States, stroke is the third largest cause of death after cardiovascular diseases and cancer. There is a lot of money being spent in taking care of stroke patients.

Indian Council of Medical Research estimates that by 2015, India will report 1.6 million cases of stroke every year and WHO warns that by 2050, 80% stroke cases in the world would come mainly from India and China and will occur among lower and middle income groups. An estimates in 2004 showed that there were 9.3 lakh cases of stroke and 6.4 lakh deaths due to stroke in India and most belonged to age group below 45 years. It was also estimated that if deaths and disability were counted together, then India lost 63 lakh of disability-adjusted life years in 2004.

If the stroke patient is 50 years or above, age-related factors such as hypertension, increased cholesterol and diabetes are suspected to be the triggers. If the patient is young, a genetic predisposition to the condition may be considered.

Typically the early signs of stroke are weakness, tingling sensation, slurred speech, abnormal gait, an inability to balance and difficulty in swallowing. The ultimate blow is the paralysis that sets in on one side of the body.

A person who has suffered a suspected stroke must get emergency medical aid. Administering clot-busting drugs, like the TPA, can minimize complications, but it requires that the drug be administered without delay.

Stroke often debilitates the sufferer, if they have succeeded in surviving it. The quality of life is often compromised in these patients. Some escape with minor abnormalities, like slurred speech or mild facial deformity. It is not surprising that many of them suffer from depression. Rehabilitation of the stroke patients may not be at its best in home surroundings and may require specialized attention.

Kineret, an anti-inflammatory drug when given to patients in the early stages of a stroke say within six hours can help reduce the level of inflammation in them, finds a new study. The findings of this study are published in the journal of Stroke. Kineret has been officially licensed to treat rheumatoid arthritis.

2. Vagus Nerve Stimulation- a Boost on the Road to Stroke Recovery

Vagus nerve stimulation may help boost the recovery of motor skills after the stroke, finds a new study. An implanted device can help achieve electrical stimulation of the nerve which is already being used to treat depression and epilepsy. This method can help speed up the process of motor skill recovery after a stroke by helping the brain reorganize itself more quickly.

3. Measuring the Risk of Stroke Not So Expensive Anymore

Interferometric diffusing wave spectroscopy, or iDWS can be used to detect brain's blood flow in the same manner as the technology currently being used but with lesser price, finds a new study.Â

Latest Publications and Research on Stroke

High Blood Pressure | Hypertension - Causes, Symptoms, Diagnosis & Treatment
High blood pressure or hypertension is a chronic condition, which usually lasts a lifetime once it is developed.

Cardiac Catheterization
Cardiac catheterization is a radiological procedure for both diagnosis and treatment of heart conditions. It involves the insertion of a long thin flexible tube called catheter a vein or an artery to the heart.

Angioplasty - Animation
Arteries supplying the heart is sometimes blocked by plaque leading to heart attack.Angioplasty is a method by which a part of the blocked artery is expanded to place a stent.Once this is done normal blood flow resumes and the heart regains its ...

Stroke - First Aid and Emergency Treatment Guide
A quick and simple First Aid guide on how to administer treatment for Stroke.

Diseases Related to Old Age
Ageing is referred to the accumulation of changes that brings a person closer to death.

How to Measure Blood Pressure - Animation
Animation to understand what is blood pressure and how to measure systolic and diastolic readings of blood pressure. High or low blood pressure can be a risk factor for many chronic diseases.

Learn How to Count Your Pulse - Animation
A simple animation that tells you how to take your pulse and count your pulse rate.

Heart Attack- Lifestyle risks
Heart attack is the death of the heart muscle due to loss of blood supply. Simple guidelines to avoid heart attack are listed.

Top Stroke Facts
A stroke is a medical emergency that occurs when the blood supply to part of the brain is suddenly stops. Read Medindia's facts on stroke.

Foreign Accent Syndrome
A rare medical syndrome in which a person suddenly develops a foreign accent and begins to speak differently is known as foreign accent syndrome (FAS).

Beauty Parlor Stroke Syndrome
Beauty parlor stroke syndrome is a form of vertebrobasilar insufficiency that causes symptoms of mild to severe stroke after a hair wash in a beauty parlor.

Infographics on Stroke
View infographic on stroke - latest facts, risk factors, how to act FAST and ways to prevent the risk of stroke.

Red Flag Symptoms You Must Never Ignore
Any deviation from normal health can cause symptoms, some of which are ominous and need immediate attention.