Measles, also known as morbilli or rubeola or red measles, is a highly contagious viral disease caused by a virus belonging to paramyxovirus family. It causes upper respiratory symptoms, fever and rash.

Measles is a vaccine-preventable disease. Vaccinations have led to a 79% reduction in measles deaths from the year 2000 to 2014 all over the world. In spite of this, measles is one of the main causes of death in young children. About 114 900 individuals died from measles in 2014; these included mainly children below 5 years of age. Measles mostly affects unvaccinated children. Few parents do not vaccinate their children due to fear of pain, needles or adverse side-effects, which makes the children susceptible to the infection. Measles is still common in many parts of the world including some countries in Europe, Asia, the Pacific, and Africa. 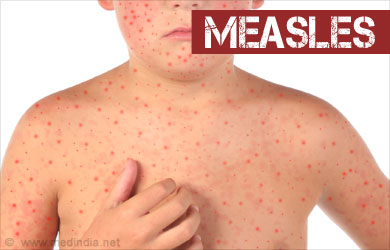 Measles is caused by a virus belonging to paramyxovirus family. Once the virus enters the body, it resides in the nasopharynx and causes symptoms.

Transmission of measles takes place from an infected person to a person without immunity to the viral infection. When infected people cough or sneeze, they release the virus into the air. This virus can survive in the air or on contaminated surfaces for even up to two hours. Any person who is in close contact with the infected person or contaminated surfaces can get this infection. The patient is highly infectious for four days before the appearance of a rash until about four days after the rash appears, and should therefore be preferably isolated during this period. The time from contact with the virus until onset of symptoms is about 10 days but may be from 7 to 18 days.

More than 90% of unvaccinated people will get the disease when exposed to the virus. Other common conditions in which people(unvaccinated) who are prone to measles infection are immunodeficiency, malnourishment, pregnancy and frequent travelers to endemic areas. Vitamin A deficiency is also one of the risk factors for measles. Children with very little vitamin A in their diets are at a greater risk of getting infected with the virus.

What are the Symptoms of Measles?

Symptoms and signs of measles mainly appear 10 to 14 days after exposure to its virus. They are: 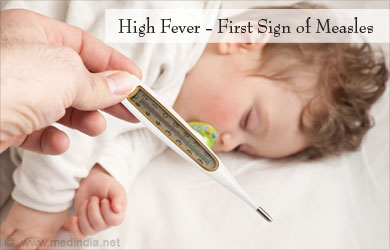 What are the Complications of Measles?

How Do You Diagnose Measles?

The identification of clinical signs and symptoms of measles such as the typical rash that starts at the hairline and gradually spreads all over the body and Koplik spots in the mouth are the main steps in diagnosing measles. In many cases, a clinical diagnosis is sufficient to conclude the presence of measles and isolate the infected person for a minimum of 5 days after the emergence of the rash, to avoid spread of infection to others.

Additionally, IgM antibodies against measles virus can be detected through serological testing and/or viral culture or reverse transcriptionPCR of throat swabs, blood, nasopharyngeal swabs and urine samples can be employed for the detection of the virus.

There are many other diseases having similar symptoms as measles; therefore they have to be ruled out. They are as follows: 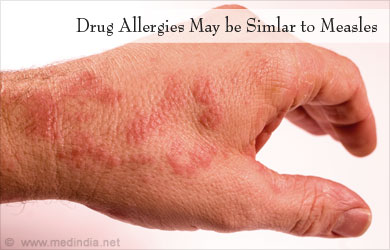 For an accurate diagnosis, antibodies in the patients blood can be measured. After a few days following the onset of the rash, measles virus-specific IgM antibodies increase in the blood and remain high for a month or two. A four-fold increase in IgG levels from the initial stages of the symptoms to the recovery phase is also indicative of measles infection. IgM antibodies can also be detected in the patients saliva. The virus can be detected from samples obtained from the nasopharynx, conjunctiva, blood or urine.

How Do You Treat Measles?

There is no particular anti-viral drug to cure measles, and patients usually recover completely without any definitive treatment. The symptoms can be treated to reduce the severity of the disease. Treatment includes: 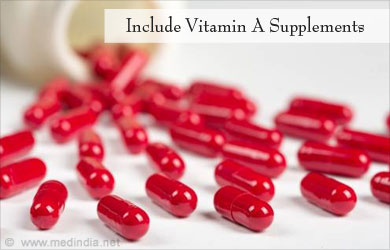 How Do You Prevent Measles?

Measles is a vaccine-preventable disease. The vaccine has reduced measles-related child death to a considerable extent. Children should get vaccinated with two doses of the measles vaccine (sometimes given in combination with the mumps and rubella vaccines) according to the immunization schedule of the resident country. MMR Vaccine is given in two doses. In children, first dose is given at 12-15 months of age and second dose at 4-6 years of age (can be given earlier if at least 28 days after the first dose). Adults who were not vaccinated as children and who never had this disease should also be vaccinated. The vaccine should be avoided in situations like pregnancy, children with leukemia or other cancers, tuberculosis or history of drug allergies, or in individuals with weak immune system. It has few side-effects like fever and measles-like rash, which is not infectious and ceases on its own. In rare cases, the vaccine has been associated with brain damage, seizures, deafness and coma.

People unvaccinated against measles and those who are immunocompromised and have been in contact with a person with measles should be excluded from school and childcare for 14 days from the day the rash appeared in the person diagnosed with measles to avoid transmission of infection.

If unvaccinated contacts receive the measles mumps rubella (MMR) vaccine within 72 hours of their first contact with measles infected person, they may return to childcare, school or work.

Women (unvaccinated) planning for pregnancy should be vaccinated with MMR vaccine at least 28 days before becoming pregnant or immediately after delivery.

If you or any of your family members has measles, then stay at home and limit interactions with others and outdoor social activities to prevent spread of infection to other people. You can again resume your outdoor activities after your treatment is over and under your doctors advice. 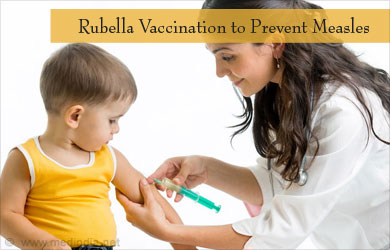 Latest Publications and Research on Measles

my mom n brother suffers from measles n mumps from last couple of, i am a student of pharmacy and i suggest them exactly these treatment and they are quiet well now.

Mumps
Mumps is a contagious viral infection that typically causes a painful swelling of one or more of the salivary gland. Mumps most commonly occurs in children aged 2-12 years who have not been vaccinated against the disease. However, it can occur at ...

Rashes
Rashes of the skin are usually not threatening, but they can be a source of great discomfort. Find out what causes skin rashes in children, babies and adults and how you can treat them.

Test Your Knowledge on Measles
Measles, also known as morbilli or rubeola or red measles, is a highly contagious, rash-causing infection belonging to paramyxovirus family. It also causes upper respiratory symptoms and fever. Efforts are being made to eradicate measles from the ...