Acupuncture Can Help You Cope With Menopausal Symptoms

Acupuncture could be a realistic treatment option to ease troublesome menopausal symptoms, reports a new study. The findings of the study are published in the journal BMJ Open.

A small study suggests that a brief course of acupuncture may help to ease troublesome menopausal symptoms.
Acupuncture Can Help You Cope With Menopausal Symptoms


The findings prompt the researchers to conclude that acupuncture offers "a realistic" treatment option for women who can't or don't want to, use hormone replacement therapy (HRT).

Menopausal symptoms are common, and depending on their severity, can have a major impact on quality of life, health, and wellbeing, as well as productivity.

Hot flushes are one of the most common symptoms, and these can go on for several years. But others include heavy sweating, emotional vulnerability, sleep disturbances, fatigue, 'fuzzy' brain, joint pain, vaginal dryness and reduced sex drive.

Hormonal and other drugs can treat the various symptoms, but they are not without side effects. And the evidence for other non-pharmacological approaches, such as exercise, relaxation, and herbal/dietary remedies, isn't very convincing, say the researchers.

Previous research suggests that acupuncture might be helpful, but design flaws or quality issues have undermined the findings, say the researchers.

In a bid to address this, they randomly allocated 70 menopausal women who met their inclusion criteria to either five weeks of standardized Western medical acupuncture, using pre-defined acupuncture points, or no acupuncture until after six weeks.

Each weekly session lasted 15 minutes, and was delivered by Danish family doctors from nine different general practices, who had additionally trained in acupuncture and had been practicing it for an average of 14 years.

Each participant completed a validated Meno Scores (MSQ) questionnaire-designed to measure outcomes from the patient's perspective-before their first session and then again after 3, 6, 8, 11 and 26 weeks.

At six weeks most (80%) of the women in the acupuncture group, said that they felt that the sessions had helped them.

And compared with those who had not been given acupuncture, they were significantly less troubled by hot flushes-a difference that was already apparent after 3 weeks of 'treatment.'

Statistically significant differences also emerged between the two groups in the severity/frequency of day and night sweats, general sweating, sleep disturbances, emotional and physical symptoms, and skin and hair problems.

The drop-out rate was low, with just one woman failing to complete all five acupuncture sessions, and no serious side effects were reported.

The researchers acknowledge that the treatment period lasted just five weeks and that a major difficulty in all acupuncture trials is the lack of a proper comparator.

This means that a placebo effect can't be ruled out, and further discussions are warranted about what level of evidence is therefore acceptable, particularly when it's impossible to accurately explain the underlying factors behind the results, they add.

Nevertheless, they suggest that their findings show that a brief course of acupuncture by suitably trained professionals is feasible in routine primary care for both doctors and patients.

"Not all menopausal women need or request treatment, and we believe this acupuncture intervention is most relevant to women who experience moderate-to-severe menopausal symptoms," they write.

"Acupuncture for menopausal symptoms is a realistic option for women who cannot, or do not wish to use [hormone therapy]," they conclude. 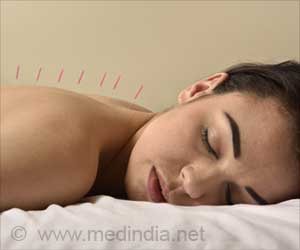 Acupuncture can Reduce Joint Pain in Breast Cancer Patients
True acupuncture can significantly reduce joint pain among women who are being treated with an aromatase inhibitor in early-stage breast cancer.
READ MORE

Acupuncture Reduces Symptoms of Menopause
Acupuncture treatments in clinical setting can reduce the number of hot flashes and night sweats associated with menopause up to 40%.
READ MORE

Acupuncture for Back Pain
Acupuncture is an ancient healing therapy, an important component of Traditional Chinese Medicine. Suffering from back pain? Acupuncture can help.... Here's how.
READ MORE