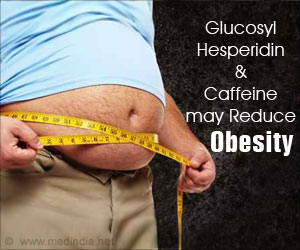 A recent study published in the Nutrition Journal indicates that a combination of glucosyl hesperidin and caffeine reduces body fat, and may be useful in the treatment of obesity.

Excessive weight gain is a common problem that affects us physically as well as psychologically. A healthy diet and regular physical exercise are often adequate to prevent obesity. Unfortunately, our current lifestyles cannot accommodate these factors and we are always looking for quick fixes.


Japanese researchers investigated the anti-obesity effect of two dietary components - Glucosyl hesperidin or G-hesperidin and caffeine, when given in the form of a tablet. G-hesperidin, is obtained from oranges. Previous studies have indicated that it reduces triglyceride levels. Triglycerides are a type of fat, which at high levels can cause heart, liver and pancreatic disease. Caffeine is a common component of beverages like tea, coffee and colas, which are consumed all over the world.


‘Glucosyl hesperidin and caffeine reduce body fat and may be useful to treat obesity.’

The subjects were asked to take one tablet daily containing 500 mg of G-hesperidin, alone or in combination with 25, 50 or 75 mg of caffeine for a period of 12 weeks. One group of patients received placebo for comparison.

The researchers measured changes in two aspects of abdominal fat, the subcutaneous fat and the visceral fat. Subcutaneous fat is the fat located just below the skin. It has been associated with conditions like osteoarthritis of the knee, sleep apnea and menstrual abnormalities. Visceral fat, or fat that is located around organs is considered to be more dangerous due to its association with conditions like diabetes, high blood pressure and cardiovascular disease. The subcutaneous fat area (SFA) and visceral fat area (VFA) were estimated using a fat scan.

The researchers noted the following:

i) Significant decrease in the subcutaneous fat area (SFA) was noticed at 12 weeks in individuals who took G-hesperidin with 50 mg or 75 mg caffeine.

ii) Visceral fat area (VFA) did not reduce with treatment with G-hesperidin with or without caffeine.

iii) Decrease in body weight and body mass index was noted in the G-hesperidin and 75 mg caffeine group.

iv) Cholesterol levels including triglyceride levels were not significantly reduced, as determined by blood tests.

v) Symptoms like common cold, pollen allergy, ringing in the ears, and pain were noted in the participants during the study, but were unlikely to be caused by the medication.

Bariatric SurgeryObesityBulimia NervosaCannabisDrug AbuseLiposuctionCaffeine and DecaffeinationCoffeeCoffee, Caffeine and Your HealthTop Health Tips to Overcome Tiredness
Sign up for Wellness Consult a Doctor Sign up for Selfcare