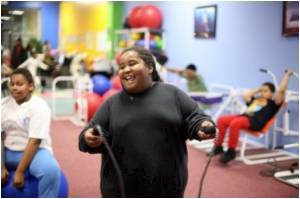 The amount of time that schoolchildren spent in the gym class was found to reduce the probability of obesity, finds study from Cornell University.

The study represents some of the first evidence of a causal effect of PE on youth obesity, and is forthcoming in the Journal of Health Economics.

The research offers support for the recommendations of organizations such as the Centers for Disease Control, Institute of Medicine, and the American Academy of Pediatrics, all of which have advocated increasing the amount of time that elementary school children spend in gym class, says lead researcher and Cornell professor of policy analysis and management, John Cawley, who conducted the study with Chad Meyerhoefer of Lehigh University (Cornell Ph.D. 2002) and David Frisvold of Emory University.


Treating variation in the amount of time that states mandate schoolchildren spend in PE as natural experiments, the researchers found that an additional 60 minutes per week of PE time (enough to bring states without an explicit requirement up to the amount of PE recommended by the CDC) reduces the probability that a fifth-grader is obese by 4.8 percentage points.
Advertisement
The researchers also detected a gender difference: additional PE time reduces weight for boys but has a negligible effect for girls. One explanation for this difference, says Cawley, is that PE and other types of physical activity are complements for boys (increased PE leads boys to be more active in structured physical activities like organized sports), but substitutes for girls (increased PE leads girls to spend more time watching television).

Taking a Call While Working Out at a Gym Causes Woman to Lose Membership
A Boston woman is disgruntled at the treatment meted out to her at a gym where she was a member and ...