What is a Rash?

A rash is not a specific medical diagnosis but is a broad term used to describe almost any abnormal change in skin color, texture and sensitivity, often including discoloration, soreness, inflammation and the development of lesions, blisters or boils. Typically the term is used to describe an area of skin that experiences irritation or swelling. The skin affected by a rash may be itchy, painful and reddened. In some cases, there may be blisters, boils or peeling skin. In some cases the changes may only be in terms of appearance but will cause no actual physical discomfort. Rashes could be symptomatic of a variety of medical problems and to treat a rash effectively it is important to get an accurate diagnosis, especially if it does not respond to broad-spectrum treatments.

While some rashes develop rapidly, in other cases the rash may only develop after several days. In most cases, rashes are mild and non-threatening and will also resolve quite quickly. For example, heat rashes and dry skin are caused by climatic conditions and will resolve when the weather changes. If the rash is severe however, it may require medical diagnosis and treatment. In some such cases, the rash may also take a considerable amount of time to resolve and treatment will be long term.

Skin rashes can be of different types and it is important that you identify the type of rash to treat it effectively. Rashes of the skin can be broadly categorized into those that are caused by exposure to certain environmental triggers or allergens like a poison ivy rash or hives, which may be caused by a food allergy, rashes that are infectious or non-infectious, rashes that are caused as a side effect to certain medications and rashes that develop as a symptom of certain infections. Some of the most common types of skin rashes include the following:

Contact dermatitis is a localized rash that is characterized by inflammation of the skin and as the name suggests results from exposure to various possible allergens.

Seborrhoeic dermatitis is a rash characterized by red or scaly patches that may appear around the eyebrows, eyelids, behind the ears, around the nose, mouth and the trunk. When the condition affects the scalp it is referred to as cradle cap in infants and dandruff in adults. This is an extremely common condition and is quite harmless.

Atopic dermatitis, better known as eczema is recognizable from the red and scaly patches of skin that it causes. The skin that is affected is also often itchy.

Psoriasis is another common skin rash that affects skin around the joints such as on the knees and elbows, causing red, scaly patches that tend to itch. It may also occur on the scalp and even affect fingernails.

Ringworm is also a skin infection that is characterized by a ring shaped lesion that forms on the affected area. It causes intense itching and can even spread very easily. This type of rash can occur anywhere on the body. 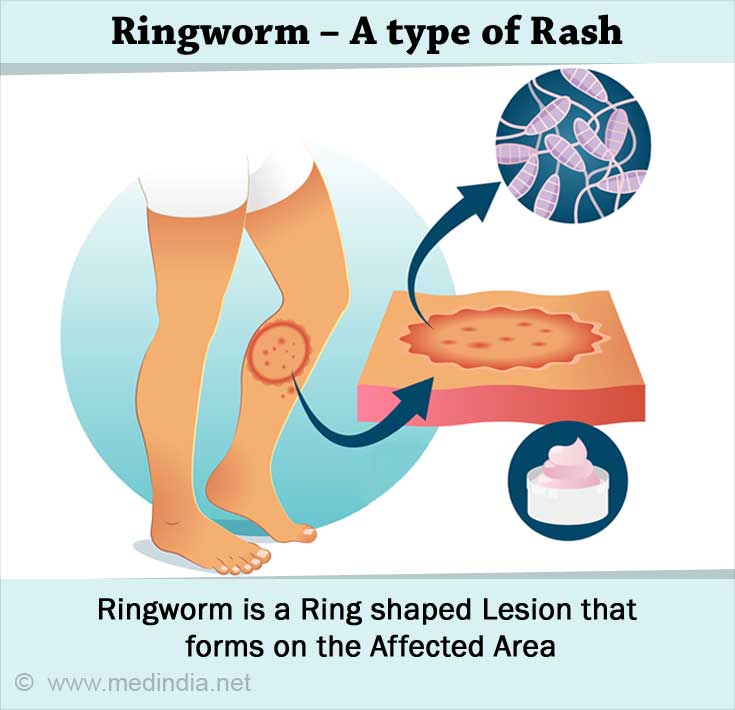 Symptomatic rashes can occur as a result of the presence of certain diseases. In such cases the appearance of blisters, boils, skin inflammation or peeling skin may be just one of many other symptoms.

In addition, some types of rashes may also develop as a result of insect bites and due to exposure to certain chemicals present in cosmetics or other substances. These are in fact also allergic reactions but it is important to recognize the causative agent, as treatment can then be more effective. For example, in the case of bites from certain insects, the swelling and inflammation occurs as a result of an allergic reaction to the saliva or digestive enzymes secreted by the insect.

In other cases, drugs and medications being used to treat a particular condition may result in the appearance of certain skin rashes. In such cases however the rash will disappear once the condition being treated is cured and treatment stops. 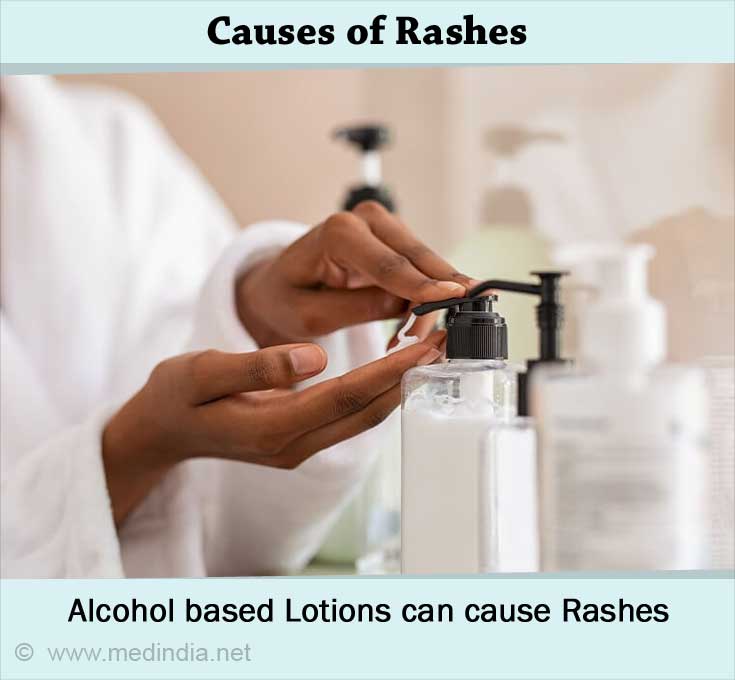 Rashes may also be caused as a symptom of certain diseases like shingles, chickenpox, measles and rubella among others. Health conditions like rheumatoid arthritis, lupus erythematosus and Kawasaki disease may also cause skin rashes to appear. Certain medications being used to treat another health condition may also cause rashes as one of their side effects.

What are the Symptoms of Rashes?

Skin rashes are themselves a symptom of various skin diseases, or of other health conditions and diseases and allergic reactions. If you do suffer from a skin rash you may notice any of the following symptoms:

The list of symptoms for general skin rashes can go on almost endlessly as almost any skin abnormality could be indicative of a skin rash. 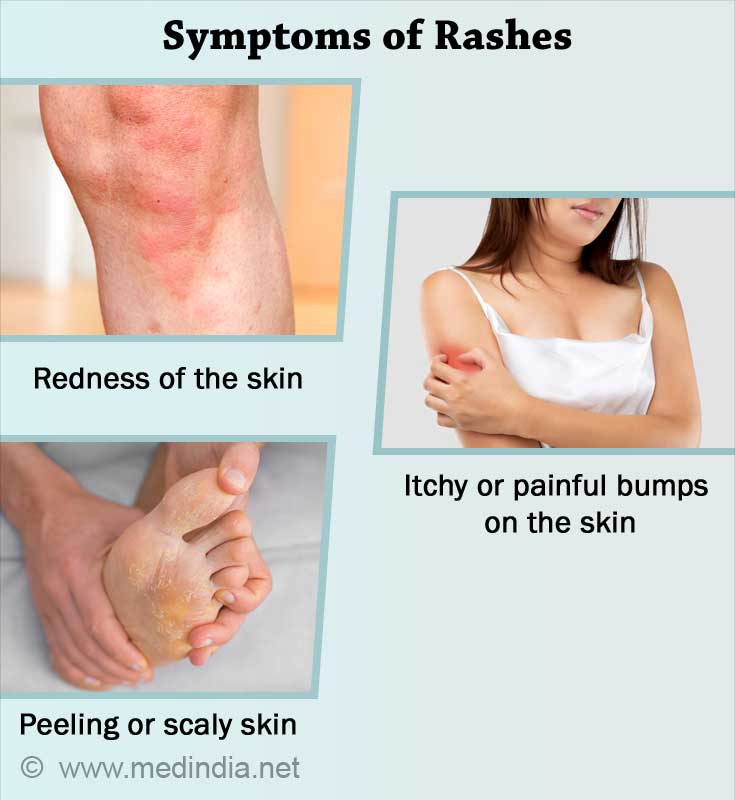 How to Diagnose Rashes?

A skin rash can often be diagnosed simply by the appearance of the rash, by accompanying symptoms if any and by examining your background and medical history. Certain symptoms can correspond to very specific diseases; a flushed appearance with redness of skin on the face, such as on the forehead and cheeks may be indicative of rosacea, while bumps or sores that suddenly appear on your face or torso are generally indicative of hives or an allergic reaction to a medication. For this reason, understanding the symptoms of various common skin diseases and rashes can help you deduce and diagnose the rash yourself. Most skin rashes are mild and will resolve naturally without any treatment or with broad-spectrum treatments. If a rash does not respond to home treatments or seems to be getting worse, it is imperative that you consult your health care provider for an accurate diagnosis.

To make a diagnosis of a simple rash your health care provider will first examine your skin and evaluate the symptoms. Make sure to provide your doctor with your personal and medical history, especially including information about any allergies and past or present medical conditions like asthma or lactose intolerance, no matter how irrelevant it may seem to you. Personal information should include details such as any changes in your diet in the recent past, changes in the soaps, detergents or cosmetics that you use, any recent trips that youve made or the presence of any other symptoms.

Your health care provider may recommend further diagnostic tests, either to identify the cause or to confirm his suspicions. Commonly used tests include allergy tests, blood tests, skin scrapings and patch tests. You dont need to panic or jump to conclusions if youre asked to do a test, as these diagnostic tools are used are often used to identify mundane fungal and viral conditions as well. 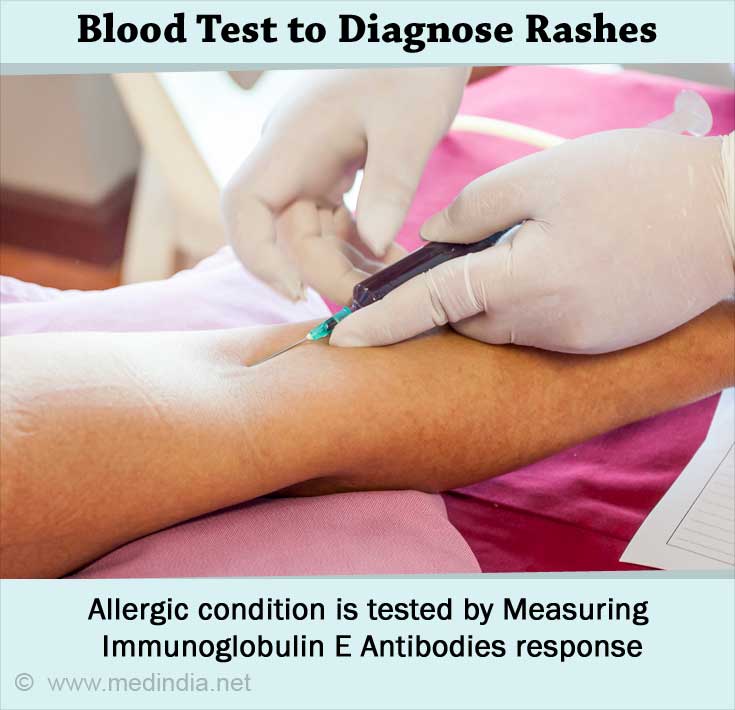 What are the Treatment for Rashes?

When dealing with general rashes there are certain standard procedures that you can follow. In the absence of any diagnosis, treatment is primarily aimed at providing relief from symptoms like itching and inflammation and may also seek to minimize the risk of scaring, especially if there are blisters or pustules present. For baby rashes and rashes in children it would be best to seek a medical diagnosis as certain types or rashes like cradle cap, ringworm and scabies are more common in younger children and treatments that are safe for adults may not be suitable for children. The best over the counter and home treatments for rashes include the following: 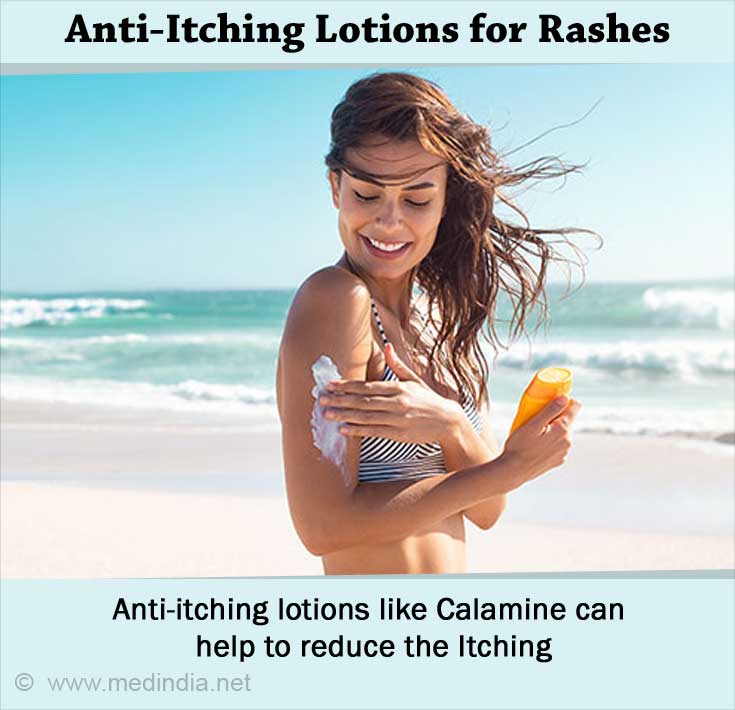 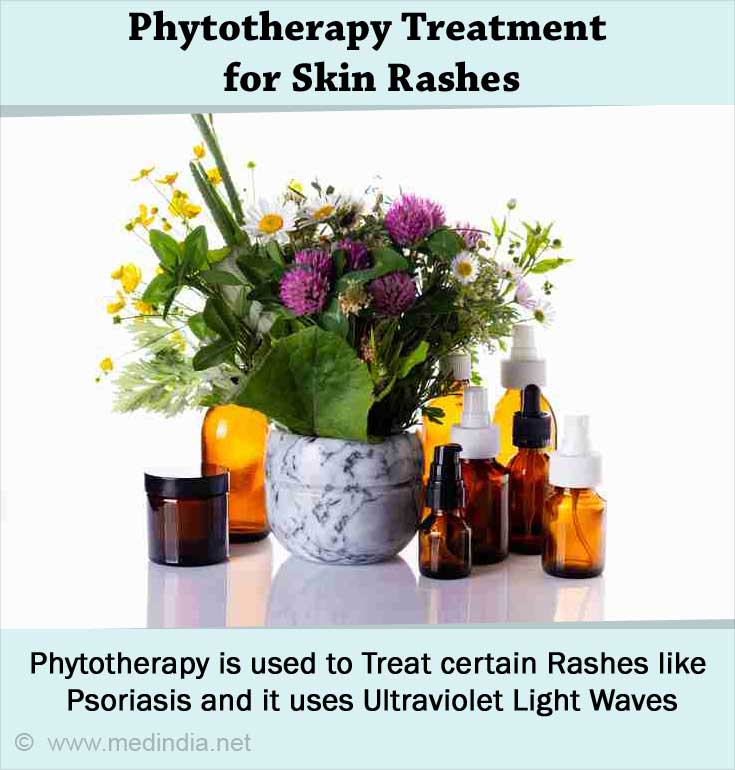 When dealing with severe rashes that do not respond to topical treatments, doctors may recommend the use of systemic corticosteroids. These are administered orally or intravenously and the administration and dosage are strictly regulated. Treatment with corticosteroids is gradually tapered off and is only used for short durations because of the risk of serious side effects from prolonged usage.

Latest Publications and Research on Rashes

Measles
Measles is a viral infection with symptoms of fever,and rashes. Measles is prevented by vaccination and staying away from the infected individuals.

Stevens-Johnson Syndrome
Stevens-Johnson syndrome (SJS) is a rare but serious disorder that affects the skin and mucous membranes. It is mostly caused by an adverse reaction to medications.

Test Your Knowledge on Prickly Heat
Prickly Heat - Introduction Prickly heat, also referred to as heat rash or sweat rash occurs in hot and humid weather when persons tend to sweat excessively. The rash can be itchy and uncomfortable. See how much you know about this ...
Sign up for Wellness Consult a Doctor Sign up for Selfcare
Advertisement
Health Topics A - Z
A B C D E F G H I J K L M N O P Q R S T U V W X Y Z