Known for its plethora of benefits and uses, castor oil is a vegetable oil squeezed out from the seeds of the castor plant, Ricinus communis, found in Africa and India. Use of castor oil is not only limited to India, but all over the world for its medicinal properties.

As a home remedy, castor oil is used widely for a number of problems and ailments. To name a few, castor oil helps deal with problems related to hair, skin, joints and intestine. Edgar Cayce, a medical intuitive, recommended castor oil packs for treatment of many problems and played a vital role in making castor oil popular in the 1940s and 1950s. 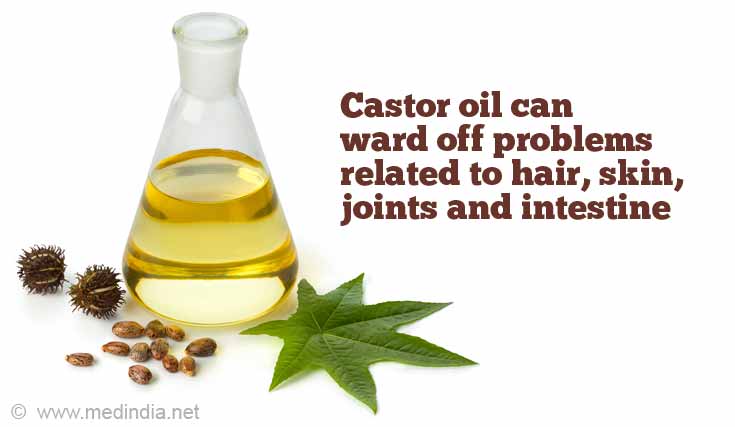 Castor oil is a triglyceride and around 90 per cent of the oil consists of ricinoleic acid, which has anti-inflammatory properties. Thus, castor oil is used for reducing inflammation and swelling of joints and tissues. Oral consumption of 2 spoonfuls of castor oil in a glass of water provides relief in cases of severe rheumatoid arthritis. The oil can also be applied to the painful area. Castor oil packs are used to provide relief from back pain and abdominal pain. It also gives a soothing effect in menstrual cramps.

Fatty acids and vitamin E of castor oil aid in hair growth. When applied on hair and scalp, castor oil stimulates hair growth, charges up blood circulation and frees the scalp of any bacterial and fungal infections and dandruff. Hair roots get the required nourishment through castor oil. The usage checks hair loss and split ends. The oil traps the moisture of the hair and prevents it from becoming dry. The same theory comes into force when castor oil is applied on eyebrows. Topical application of castor oil helps in thickening of eyebrows. 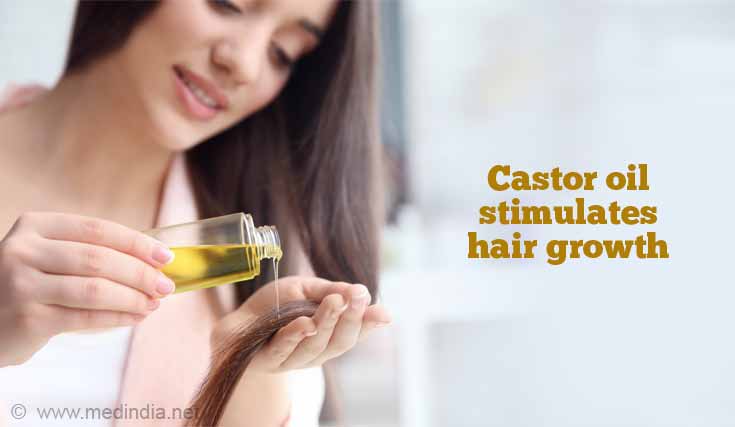 Castor oil is known for its laxative benefits. When taken orally, ricinoleic acid gets released in the intestine and then it starts functioning as a laxative. Its hotness initiates action by digesting the undigested food residue and cleanses the system by helping in proper bowel movement. Many women tend to complain about constipation after delivery. If they consume castor oil prior to going to bed at night, the acid helps in proper bowel movement.

Application of castor oil on skin keeps it hydrated and free from infections, thus a remedy for acne. It is also used to do away with dry skin of hands and legs. It is used to treat ringworms and clear away stretch marks formed after delivery. Regular use helps in keeping off wrinkles. Using the oil locally treats painful cracks in nipples. It also heals cuts and wounds. It can also treat severe cases of diaper rash in babies.

Castor oil is anti-allergic in nature and this helps in doing away with allergies related to skin and naso-pharyngeal area. On an empty stomach, five drops of castor oil taken in the morning in a little juice or water helps solve the problem.

Castor oil also helps in getting rid of warts and moles. In Edgar Cayces Encyclopedia of Healing, Cayce suggests applying castor oil with a pinch of baking soda on the area concerned, for the desired result. Topical application also solves the problem of cysts and corns by dissolving them. Using castor oil pack helps dissolve cysts in the ovary as the fatty acid in castor oil is easily absorbed by the skin.

Those relying on naturopathy say that castor oil strengthens the immune system by increasing white blood cells and thus fights infections. After a scientific study, Harvey Grady said when applied on the body, castor oil increases the count of T-11 cells and total lymphocytes in the blood within 24 hours of application. This energizes bodys defence mechanism. 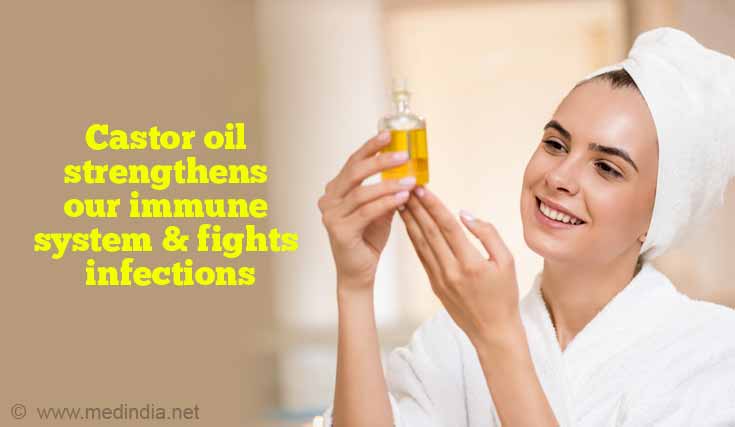 When castor oil is given orally to pregnant females at full term, it induces labor by pushing uterus contraction, say scientists at the Max Planck Institute for Heart and Lung Research. The ricinoleic acid in the oil activates EP3 prostanoid receptor in the uterus, thus helping in delivery. But, it is not recommended much as it creates a nauseous feeling.

Its benefits can be reaped even after the birth both by mother and child, as massaging the lactating mothers breasts with warm castor oil increases breast-milk production.

Other Uses of Castor Oil

In mainstream section, castor oil is used as a medium to deliver some chemotherapy drugs to cancerous tumors. While treating metastatic breast cancer and other tumors, Cremophor EL is used as an agent for cancer drug Paclitaxel. But at times, it creates certain problems for the patient. Any irritation in eye can also be dealt with by applying castor oil.

Only cold pressed castor oil should be used and the oral usage of castor oil is safe when directed by your doctor. If you are self-treating, make sure you follow all directions on the product package and if you are not sure about any part of the information, check details with your doctor or pharmacist.

Latest Publications and Research on Benefits of Castor Oil

Castor oil is a vegetable oil that can be used for benefit and improvement of human health. It is beneficial to eyes,skin,face and hair. It improves natural functions of body and keeps it fit and healthy.

It's a great info, I never though castor oil has so much benefits.

I have read elsewhere that castor oil can help in dissolving the cataract also. Any insights?

Scientists Genetically Alter Castor-Oil Plant To Produce Bio Lubricants
University of Almeria scientists have genetically altered the castor-oil plant so as to use it as a factory to produce bio lubricants.

Castor Oil / Home Remedies Using Castor oil
Castor oil has antioxidants and treats a number of ailments. Castor oil is used over centuries for its medicinal and therapeutic benefits.

Loram (2 mg) (Lorazepam) Hearing Loss Calculator Daily Calorie Requirements Calculate Ideal Weight for Infants Find a Doctor Post-Nasal Drip The Essence of Yoga Indian Medical Journals Find a Hospital Turmeric Powder - Health Benefits, Uses & Side Effects
This site uses cookies to deliver our services.By using our site, you acknowledge that you have read and understand our Cookie Policy, Privacy Policy, and our Terms of Use  Ok, Got it. Close