US Research Identifies Gun Violence as 'Important' Cause of Youth Injury 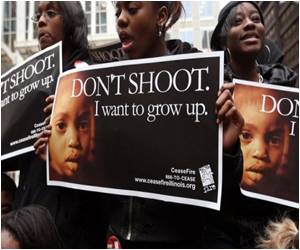 Youths injured in gun violence are more likely to need intensive care and are much more likely to die from their gunshot wounds than children injured by other means, US researchers said Tuesday.

The findings, reported in the Journal of the American Medical Association, offer a rare look at the impact of gun violence in America, where federally funded research on the matter has all but halted since the mid 1990s.

About two percent of youths seen in hospital emergency rooms were wounded by gunshots and 13 percent of those injuries resulted in death, according to the results of a small research project at two urban trauma centers in Colorado.


In comparison, very few patients with other injuries at the trauma centers died -- just 1.7 percent.

The data was collected from 2000 to 2008 on fatal and nonfatal firearm injuries in youths aged four to 17 at trauma centers in Denver and Aurora.
Advertisement
A total of 6,930 youths were injured during that period; 129 received care for gunshot wounds, or about two percent.

However, half of the patients with gunshot wounds needed intensive care, and 17 of them died (13 percent).

"Firearms were an important mechanism of injury in the youth in this study," said the research letter by doctors at the University of Colorado School of Public Health, Denver Health Medical Center and Children's Hospital Colorado.

Researchers said their study was limited by its small scope, and the fact that it did not account for deaths that occurred on the scene of the shooting, which typically amount to a "significant fraction of firearm-related deaths."

"More recent data from other areas with detail on the circumstances of the firearm injury are needed," the article concluded.

The US Centers for Disease Control halted research on guns in the mid 1990s, after Congress barred money for research used to advocate or promote gun control amid pressure from pro-gun lobbyists.

Lawmakers have since widened the scope of that ban to include the National Institutes of Health and the Department of Health and Human Services.

After December's school shooting in Newtown, Connecticut that killed 26 children and educators, President Barack Obama signed an executive order directing the CDC and scientific agencies to conduct research into the causes and prevention of gun violence.

He also asked Congress to allocate $10 million "for the CDC to conduct further research, including investigating the relationship between video games, media images, and violence," the White House said.

However, gun issues remain a source of political stalemate in Washington, where the Senate this month voted down a bill to expand background checks on firearms buyers.

Take Comprehensive Public Health Approach to Curb Gun Violence in US: Experts
Harvard experts say the best way to curb gun violence in the U.S. is to take a broad public health ....