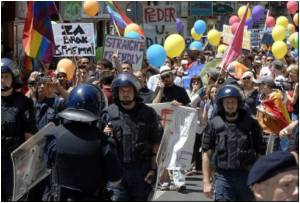 According to a new report, news stories about mass shootings involving a shooter with mental illness heighten readers' negative attitudes towards persons with serious mental illness.

The study was done at the Johns Hopkins Bloomberg School of Public Health. The researchers also examined how such news stories impact support for policies to reduce gun violence.

Reading an article describing a mass shooting raises readers support for both gun restrictions for persons with serious mental illness and for a ban on large-capacity ammunition magazines.


The results are published in the April issue of the American Journal of Psychiatry and have important implications for advocates and policy makers who promote gun safety policy.
Advertisement
"The aftermath of mass shootings is often viewed as a window of opportunity to garner support for policies to reduce gun violence, and this study finds public support for such policies increases after reading news stories about a mass shooting," lead study author Emma (Beth) E. McGinty, MS, a PhD candidate with the Johns Hopkins Center for Gun Policy and Research, part of the Johns Hopkins Bloomberg School of Public Health, said.

"However, we also found that the public's negative attitudes toward persons with serious mental illness are exacerbated by news media accounts of mass shootings involving a shooter with mental illness," Emma said.

The stigmatization of people with mental illness may lead to a reluctance to seek treatment or raise other barriers to care.

Among study respondents that read a news story describing a mass shooting, 79 percent supported gun policy measures with restrictions for the mentally ill, compared to 71 percent in the control group.

Nearly 54 percent of respondents who read a news story of a mass shooting thought persons with serious mental illness were likely to be dangerous, compared to 40 percent in the control group.

Including information about proposed gun restrictions for persons with serious mental illness or a ban on large-capacity magazines in a news story did not affect attitudes towards the mentally ill compared with the story describing a shooting that didn't mention a policy response.

"While our study confirms news stories on mass shootings involving a shooter with mental illness contribute to negative perceptions of mental illness, our study results indicate that discussions of gun policies designed to keep firearms from individuals who have a serious mental illness do not lead to greater stigma," study author Daniel Webster, ScD, MPH, director of the Johns Hopkins Center for Gun Policy and Research, said.

"As states across the U.S. consider restrictions on gun access among those with serious mental illness, future research should examine whether such policies deter people with mental illness from seeking treatment," he added.

Grieving Process Could Soon be Branded a Mental Illness
Psychiatrists have claimed that the grieving process could be branded a medical condition if a ......

Smoking is Widespread Among People With Mental Illnesses: CDC
A new report released by the Centers for Disease Control and Prevention reveals that smoking is ......

People With Serious Mental Illnesses can Lose Weight
In a recent study it was found that people with serious mental disorders like schizophrenia, ......