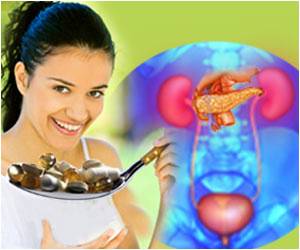 While it remains unknown whether the method might work in people, researchers at Albert Einstein College of Medicine of Yeshiva University in New York said they are encouraged by its ability to halt cancer's spread, known as metastasis.

"At this point, we can say that we have a therapy that is very effective for reducing metastasis in mice," said co-senior author Claudia Gravekamp, associate professor of microbiology and immunology at Einstein.


The experimental technique described in the Proceedings of the National Academies of Science works by using a weakened form of Listeria, which in its wild form can cause foodborne illness.
Advertisement
Ninety percent of mice with pancreatic cancer treated with the technique showed no evidence of cancer spread after three weeks.

Researchers halted the experiment at 21 days because that is when the control mice, who had pancreatic cancer but were not treated, began to die.

Pancreatic cancer tends to spread quickly through the body and is particularly lethal, since it is often discovered only once it has progressed beyond the pancreas.

Researchers attached radioisotopes, commonly used in cancer therapy, to the bacteria. The radioactive bacteria then infected cancer cells but not normal cells.

The treatment stopped the cancer's spread in most cases, and appeared to have no ill effects on the mice, but more work needs to be done to see if it may extend survival time.

"With further improvements, our approach has the potential to start a new era in the treatment of metastatic pancreatic cancer," said Gravekamp.

Gravekamp's team is the first to test the concept in an animal model.

Source: AFP
Advertisement
<< French City of Montpellier to Play Host to First Gay Weddin...
US Research Identifies Gun Violence as 'Important' Cause of ... >>

Research Probes How Pancreatic Cancers Metastasize
Researchers have discovered that a protein found in the cells surrounding pancreatic cancers play a ...