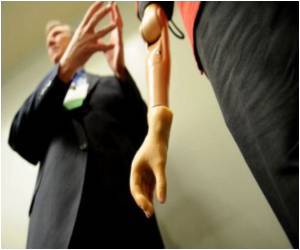 The Artificial Muscle-Operated (AMO) Arm not only enables amputees more range of movement as compared to other prosthetic arms but it allows amputees to avoid invasive surgeries and could potentially save hundreds of thousands of dollars. The AMO Arm is controlled by the user's brain signals and is powered by 'artificial muscles' - simple pneumatic pumps and valves - to create movements. In contrast, traditional prosthetic limbs - which typically offer more limited movements - rely on intricate and expensive electrical and mechanical components.

Developed by third-year student Thiago Caires and second-year student Michal Prywata, the AMO Arm is controlled by the brain and uses compressed air as the main source of power. The digital device makes use of signals in the brain that continue to fire even after a limb is amputated.


Users wear a head-set that senses a signal - for example, the thought "up" - and sends it wirelessly to a miniature computer in the arm. The computer then compares the signal to others in a database. The resulting information is sent to the pneumatic system, which in turn, activates the arm to create the correct movement. Simulating the expansion and contraction of real muscles, the system makes use of compressed air from a small, refillable tank in the user's pocket. The artificial muscle system created by Caires and Prywata is a first in the field of prosthetics and they continue to work on perfecting their system.

In some stunning news, participants in a study to test the function of a robotic prosthetic arm were unhappy with the results because it was 'too easy.'
Advertisement
Since the device does not include microelectronics and motors, it costs one-quarter of other functional prosthetic arms, which can run users more than 80,000 dollars, depending on the complexity of the prosthesis. As the AMO Arm is non-invasive, the period of adjustment for new users is drastically decreased. While traditional prosthetics may require weeks of learning and training, basic function with the AMO Arm can be mastered in mere minutes.

"In just ten minutes of practising, a person can pick up the mind-control aspect of the technology," added Prywata.