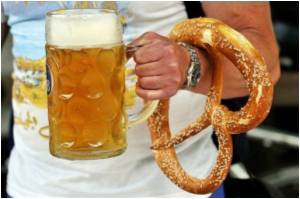 A new study has found that heavy beer drinkers who have a specific genetic variant in the cluster of three genes that metabolize alcohol are at significantly higher risk of developing non-cardia gastric cancer.

Study results also showed that the same risk is also elevated (but not as significantly) for heavy beer drinkers who do not have the variant, known as rs1230025, and for non-drinkers who have rs1230025 or rs283411.

Alcohol consumption continues to play an important role in many social and religious celebrations.However,serious risks are also associated with it!
Advertisement

"This is a classic gene-environment interaction," said Eric Duell, senior epidemiologist in the Cancer Epidemiology Research Program at the Catalan Institute of Oncology in Barcelona, Spain. "Having both of these risks - heavy beer consumption and rs1230025 - appears to be worse in terms of gastric cancer risk than having just one or neither."


Duell and colleagues conducted a comprehensive analysis of alcohol consumption and gastric cancer risk in the more than 521,000 people aged 35 to 70 years old who participated in the European Prospective Investigation into Cancer and Nutrition (EPIC) study from 1992 through 1998.

Stomach is the organ where food is mixed, stored and partially digested.
Advertisement
The researchers evaluated the type of alcohol consumed (i.e. wine, beer or liquor) and the location and grade of cancer. Total consumption of 60 grams of pure ethanol/alcohol from all beverage types combined carried a 65 percent increased risk. (One 12 ounce beer contains about 13 grams of pure alcohol/ethanol.)

However, this association was confined to beer. Results showed that drinking 30 grams of pure ethanol/alcohol or more a day from beer was linked to a 75 percent increased risk of developing gastric cancer. Wine and liquor was not associated with gastric cancer risk, Duell said.