Written by Julia Samuel
Medically Reviewed by The Medindia Medical Review Team on January 16, 2017 at 3:52 PM 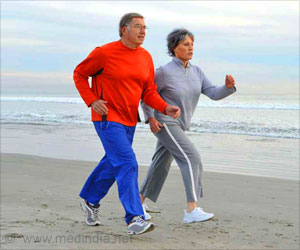 Cardiorespiratory fitness (CRF) is a modifiable health factor that can be improved through regular engagement in moderate to vigorous sustained physical activity such as walking, jogging, swimming, or dancing.

Older adults who scored high on CRF tests performed better on memory tasks than those who had low CRF. Further, the more fit older adults were, the more active their brain was during learning.

'Cardio'or aerobic exercise is repetitive, rigorous, rhythmic, and involves the large muscles (like the arms and thighs). Aerobic translates as 'with oxygen'; therefore this form works the circulatory system, increasing blood flow to the heart (and thereby oxygen flow) and improves cardiovascular fitness.

According to the researchers this study highlights that CRF is not only important for physical health, but is also associated with brain function and memory performance.

Exercise and Fitness
Exercise is about revamping your lifestyle, not just weight loss. Exercise to get healthy - that way, you'll last longer at it and get better results.
Advertisement
Difficulty remembering new information represents one of the most common complaints in aging and decreased memory performance is one of the hallmark impairments in Alzheimer's disease.

Cardiorespiratory fitness was assessed in healthy young (18-31 years) and older adults (55-74 years). They were made to walk and jog on a treadmill while researchers measured the ratio of inhaled and exhaled oxygen and carbon dioxide. These participants also underwent MRI scans which collected images of their brain while they learned and remembered names that were associated with pictures of unfamiliar faces.

The researchers found that older adults, when compared to younger adults, had more difficulty learning and remembering the correct name that was associated with each face.

Higher fit older adults also had greater activation than young adults in some brain regions, suggesting that fitness may also serve a compensatory role in age-related memory and brain decline.

"Therefore, starting an exercise program, regardless of one's age, can not only contribute to the more obvious physical health factors, but may also contribute to memory performance and brain function," explained corresponding author Scott Hayes, PhD, assistant professor of psychiatry at Boston University School of Medicine and the Associate Director of the Neuroimaging Research for Veterans Center at the VA Boston Healthcare System.

The researchers caution that maintaining high levels of fitness through physical activity will not entirely eliminate or cure age- or Alzheimer's disease related decline, but it may slow down the decline.

Five Essential Components of Physical Fitness
Did you know that physical fitness is more important than maintaining your figure or a six-pack? Read on to know more about the 5 components of fitness.

Walking for Fitness and Weight Loss
A few extra steps a day are enough to keep you fit.

Blood Donation - Recipients Selfie Addiction Calculator Daily Calorie Requirements Accident and Trauma Care Nutam (400mg) (Piracetam) Turmeric Powder - Health Benefits, Uses & Side Effects Calculate Ideal Weight for Infants The Essence of Yoga Diaphragmatic Hernia Sanatogen
This site uses cookies to deliver our services. By using our site, you acknowledge that you have read and understand our Cookie Policy, Privacy Policy, and our Terms of Use