Written by Madhumathi Palaniappan
Medically Reviewed by The Medindia Medical Review Team on December 8, 2016 at 12:56 PM 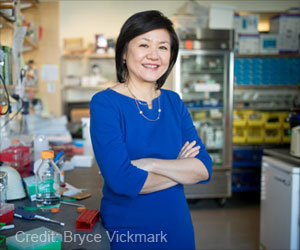 Flickering LED lights at a specific frequency can reduce the beta amyloid plaques in Alzheimer's disease, finds a study from Massachusetts Institute of Technology.

New treatment option for Alzheimer's disease works by inducing brain waves called Gamma Oscillations. This would help to revitalize the cells that are responsible for destroying plaques and helps the brain to suppress beta amyloid production.

The research study was published in the journal Nature.


Li-Huei Tsai, the Picower Professor of Neuroscience, director of MIT's Picower Institute for Learning and Memory, said "It's a big 'if,' because so many things have been shown to work in mice, only to fail in humans."
Advertisement
"But if humans behave similarly to mice in response to this treatment, I would say the potential is just enormous, because it's so noninvasive, and it's so accessible." he added.

Michael Sipser, dean of MIT's School of Science, said "This important announcement may herald a breakthrough in the understanding and treatment of Alzheimer's disease, a terrible affliction affecting millions of people and their families around the world."

"Our MIT scientists have opened the door to an entirely new direction of research on this brain disorder and the mechanisms that may cause or prevent it. I find it extremely exciting."

The research study was conducted on mice which were genetically programmed to develop Alzheimer's disease and found that they did not show any plaque accumulation or behavioral symptoms. The reason behind this was due to impaired gamma oscillations during patterns of activity that are essential for memory and learning.

The research team stimulated gamma oscillations at 40 Hertz in a brain region called Hippocampus that is critical in memory formation and retrieval. These studies were based on Optogenetics technique.

The researchers were also trying to find less invasive techniques for obtaining the same effect. And came up with a idea of using an external stimuli. Tsai and Emery Brown, Edward Hood Taplin Professor of Medical Engineering and Computational Neuroscience, a member of the Picower Institute, built a simple device consisting of LED strips to flicker at different frequencies.

Tsai, said, "The bottom line is, enhancing gamma oscillations in the brain can do at least two things to reduced amyloid load. One is to reduce beta amyloid production from neurons. And second is to enhance the clearance of amyloids by microglia."

Further research is required to investigate whether the reduction in amyloid plaques have any effect on behavioral symptoms and also whether this technique could impair other neurological disorders that involve gamma oscillations.