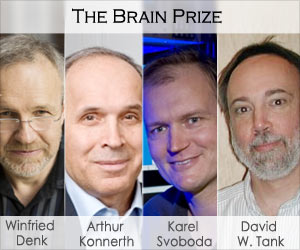 'The Brain Prize 2015' has been awarded to four scientists, Winfried Denk and Arthur Konnerth (Germany), and Karel Svoboda and David Tank (USA), for the invention and development of two-photon microscopy, a transformative tool in brain research.

The prize is considered to be one of the world's most valuable neuroscience prizes. The Brain Prize is a personal prize, awarded to one or more scientists who have achieved distinction through outstanding contributions to European brain research.

Two-photon microscopy is one of a handful of techniques, which, over the last 15 years, has dramatically changed the way we study the brain. It combines advanced techniques from physics and biology, to allow scientists to examine the finest structures of the brain, in real time. Using this revolutionary technology, researchers are now able to examine the function of individual nerve cells with high precision, especially how nerve cells communicate with each other in networks.


This is a huge step forward in understanding the physical mechanisms of the human brain and how it processes information. Furthermore, researchers have been able to follow how connections between nerve cells are established in the developing brain.

It has led to identification of signaling pathways that control communication between nerve cells and provide the basis for memory. It has enabled the study of nerve cell activity in those networks that control vision, hearing and movement.

Professor Povl Krogsgaard-Larsen, Chair of Grete Lundbeck European Brain Research Foundation, which awards The Brain Prize, said: "Thanks to these four scientists, we're now able to study the normal brain's development and attempt to understand what goes wrong when we're affected by destructive diseases such as Alzheimer's and other types of dementia. More than that, we are able to visualize how adaptive behavioral changes affect the nerve cells of living animals."

Since its invention in 1990, two-photon microscopy has formed the basis of more than 10,000 research papers, not only in brain research but also in other areas of physiology, embryology and tissue engineering.

Professor Maiken Nedergaard, of the University of Rochester Medical School, New York, said: "Traditionally, brain research made use of electrical measurements to study the activity of neurons. Two-photon microscopy has revolutionized the study of the brain, since it is now possible to map the function of the individual parts of a neuron as well as communication between several thousand neurons in live, behaving animals."

However, the short wavelength, high energy UV-light tends to spread through, the tissue making more areas fluoresce and making it difficult to focus upon a specific cell or cell part. Furthermore, UV-light cannot penetrate deep into the tissue, and because of its high energy quickly exhausts the fluorescent molecules.

The two-photon principle allows the use of long wavelength (low energy) infrared light. Under normal circumstances, one photon of infrared light is not enough to elicit fluorescence. However, the pulsed laser can deliver a large amount of light to a specific point. Intermittently two photons will hit a fluorescent molecule, which is sufficient to make it glow.

The infrared light does not exhaust the fluorescent molecules, as happens in conventional fluorescence microscopy. Furthermore, infrared light can go much deeper down into the tissue: this gives the technique its main advantage, for the first time we can see real changes inside a living, active brain, even down to hundreds of micrometers below the brain surface (a human hair is around 90 micrometers thick).

The four researchers will share the one million Euro prize, which will be presented at a ceremony on May 7 in Copenhagen by His Royal Highness Crown Prince Frederik of Denmark.

Winfried Denk, born 12 November 1957 in Germany, studied physics at the Ludwig- Maximilians University in Munich, the Swiss Federal Institute of Technology, and Cornell University (PhD 1989) in 1989. He worked at the IBM research lab in Zurich and at Bell Laboratories before becoming a Director at the Max Planck Institute for Medical Research in Heidelberg in 1999. He is in the process of moving his department, to the Max Planck Institute of Neurobiology in Martinsried. He is also an Adjunct Professor of Physics, University of Heidelberg and a Senior Fellow, HHMI Janelia Research Campus.

His main interests lie in the development of microscopy techniques. Currently he is working on methods to reconstruct the synaptic circuit diagram of an entire mouse brain using serial block face electron-microscopic.

Arthur Konnerth, born 23 September 1953 in Romania, graduated as MD from the Ludwig-Maximilians University Munich in Germany. Currently he is the Friedrich-Schiedel-Chair of Neuroscience and Director of the Institute for Neuroscience at the Technical University Munich; member of the German National Academy of Sciences Leopoldina, the Academia Europaea and the Bavarian Academy of Sciences.

He is currently focused on the development and application of methods that allow a quantitative understanding of function and dysfunction of neurons and circuits in the intact brain. His research team pioneered in vivo two-photon imaging of cortical circuits with single cell resolution. More recently, they developed the LOTOS (low power temporal oversampling) method of high-resolution two-photon calcium imaging and used it for the functional mapping of dendritic spines in vivo. These approaches are used in the lab for the exploration of behavior-determined synaptic signaling and dendritic signal integration in neurons of defined brain circuits. A major goal is a better understanding of the cellular and circuit mechanisms of learning and memory in the healthy brain, as well as the pathophysiology underlying the impairment of cognition and memory in Alzheimer's disease.

He has received several accolades and honours including Theodor-Bücher-Medal of the Federation of European Biochemical Societies, Max-Planck Prize and Michael-Prize for Epilepsy Research.

Karel Svoboda, born 30 December 1965 in Czech Republic, received a PhD in biophysics from Harvard University. Currently he is a Group Leader at the Janelia Research Campus, Howard Hughes Medical Institute.

His work is focused on the structure, function and plasticity of cortical circuits in behaving mice, mainly in the context of tactile sensation and decision-making based on tactile evidence. By recording from and manipulating defined cell types, he analyzes the information flow in cortical circuits. Current areas of investigation include: i) the neural code underlying haptic sensation in the somatosensory cortex at the level of individual spikes; ii) the mechanisms of motor planning, short-term memory, and movement execution in the motor cortex and motor thalamus; iii) development of new optical, molecular, and behavioral methods for systems neuroscience.


David W. Tank, born 3 June 1953 in USA, earned his B.S. in Physics and Mathematics at Case Western Reserve University in 1976 and a Ph.D. degree in Physics from Cornell University in 1983. Currently he is the Henry L. Hillman professor at Princeton University and Co-Director of the Princeton Neuroscience Institute. He also directs the Bezos Center for Neural Circuit Dynamics. At the Simons Foundation, he is the Director of the Simons Collaboration on the Global Brain.

He became a member of American Academy of Arts and Sciences in 2000. Columbia University awarded him The W. Alden Spencer Award in 2006. He was awarded the Perl-UNC Neuroscience prize in 2015.