Written by Madhumathi Palaniappan
Medically Reviewed by The Medindia Medical Review Team on November 4, 2016 at 6:04 PM 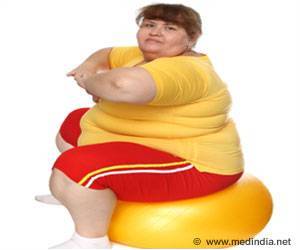 A research team from Stony Brooks University found gas-filled balloon capsules to be useful in treating obesity. These capsules were found to reduce about 1.9 times weight in patients than those who depend on diet, lifestyle therapy and exercises for weight loss.

The research study was presented at the ObesityWeek 2016 meeting hosted by the American Society for Metabolic and Bariatric Surgery (ASMBS) and The Obesity Society (TOS).

Obesity
Obesity is a condition where there is excess accumulation of body fat which poses a risk to the health of the individual. It can affect children and adults.
Advertisement
‘Obalon gas filled balloon capsules were found to reduce weight in obesity patients.’

The American Society for Metabolic and Bariatric Surgery stated 24 million people in America to have severe obesity. 'Obesity' term usually means a Body Mass Index of above 30.

Researchers Predict Sharp Rise In Obesity-Linked Conditions Among Children
Researchers estimate that by 2025, around 91 million children are bound to get obese at a global level.
Advertisement
The Centers for Disease Control and Prevention statistics in 2011-2014 also stated that women were found to be more obese than men.

"This combination of lifestyle modification and balloon therapy provides a new low risk option for patients struggling with obesity."

Capsule containing the balloon gets inflated through the microcathether which makes the patient's stomach feel full. This inturn would help to control the overeating habits of the obese person. The treatment procedure lasts for 6 months and around 3 balloons can be placed for three months.

The research study was conducted on 387 patients. Out of which half of them received the gas-filled balloon capsules and other half received sugar-filled sham capsules. All patients were found to follow lifestyle therapy for 25 minutes for every three weeks. Three capsules were swallowed for a period of 12 weeks by obese patients with BMI between 30 and 40.

After a period of six months, gas-filled capsules in patients were removed endoscopically.

Six months later, about 89.5% of average weight loss was maintained after the removal of gas-filled capsules.

90.8% of patients reported abdominal cramps and nausea as side effects for gas-filled balloon capsules.

Raul J. Rosenthal, MD, ASMBS President and Chairman, Department of General Surgery, Cleveland Clinic Florida said that,"There is no magic pill for obesity, but this swallowable balloon and other intragastric balloons may offer new hope to people who otherwise would not seek treatment or not have as good a result with diet and exercise alone."

Quiz on Obesity
"We are indeed much more than what we eat, but what we eat can nevertheless help us to be much more than what we are". - Adelle Davis There are thousands out there battling 'the bulge'. With childhood obesity on the rise even children are not spared. If your weight issues are threatening to weigh you down learn more about obesity by taking part in this quiz.