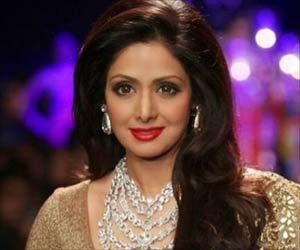 Renowned Indian actor Sridevi died late Saturday night due to cardiac arrest. She had gone to Dubai with her family for a wedding and had a fainting spell in her bathroom and was immediately rushed to Rashid Hospital where she was declared: Brought dead.

Having a career which expanded for over four decades, Bollywood's Veteran actress Sridevi passed away at the age of 54. The actor had gone along with her family to attend her nephew Mohit Marwah's wedding. She reportedly had a fainting spell in her bathroom and was immediately rushed to Rashid Hospital in Dubai.

Advertisement
‘Forensic doctors in Dubai concluded that Sridevi died of a heart attack and added there is nothing suspicious about the way the superstar passed away.’

Some of her family members returned from Dubai after the wedding, but Sridevi, her husband Boney Kapoor and her younger daughter Khushi stayed back. Her elder daughter -- Janhvi -- had not traveled with the family because of the shooting schedule for her upcoming Bollywood film, her first in the industry.


A Star in Indian Film Industry

The actor had been a known face in South Indian films. She made her debut as a child artist in in Tamil film "Thunaivan" in 1969. She was 4 at that time. Sridevi made her Bollywood debut in 1978 with "Solva Sawan". But it was only after five years with Jeetendra-starrer "Himmatwala" that she gained commercial success.
Advertisement
Her other major box office hits of the era were "Chaalbaaz", where she played the role of twins, "Nagina", and "Khuda Gawah" opposite Amitabh Bachchan.  After "Judaai", Sridevi took a break from acting to focus on her marriage with Boney Kapoor. She had two daughters -- Janhvi and Khushi -- with Kapoor.

Final Rituals Yet to Be Decided

Sridevi's mortal remains will be flown back to India from Dubai, her family said in a statement.  Sridevi's body could not be repatriated yesterday as the final investigation reports from Dubai Police were not ready last evening.  Reliance Communications (RCom) chairman Anil Ambani has reportedly offered to fly her remains back home in his private jet.