A tracheostomy or tracheotomy is a surgical opening created through the neck into the trachea or windpipe to provide direct access to a breathing tube. This is a surgical procedure performed in the operation theatre under general anaesthesia. A tube is placed in the windpipe and this provides an airway and allows for removing secretions from the lungs.

A tracheostomy is usually done when the lungs do not receive sufficient air. There are many reasons for this including a range of critical illnesses like chronic pulmonary disorders, throat or other cancers affecting breathing, vocal cord paralysis (VCP), laryngeal injuries, congenital abnormalities in the airway, disorders like Treacher Collins and Pierre Robin Syndromes, neuromuscular diseases, spinal injuries and long-term coma.

Though the tracheostomy is a common procedure in critical patients requiring long-term mechanical ventilation, the optimal timing of this procedure is highly debated. There is no standard clinical guide on the optimal timing of this procedure. Data from diverse clinical studies and trials indicate varied results. Some studies (Griffiths and Barber et al., 2005; Suzuki and Kusunoki et al., 2013) indicate early tracheostomy as optimal whereas other studies indicate late tracheostomy as optimal (Duncan Young et al., 2013). In the light of inconclusive evidence regarding timing of the procedure, clinicians usually consider a risk-benefit analysis before recommending an early or late tracheostomy. 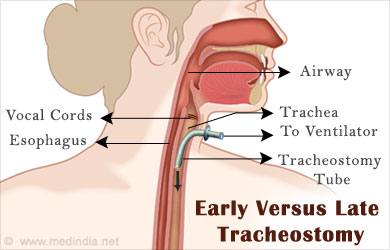 When is a Tracheostomy Needed?

A tracheostomy is required when the patient is on a ventilator for more than 2-3 weeks. A ventilator is a machine that supports breathing and is connected to a tube that goes through the tracheostomy. This trach tube carries oxygen-rich air from the ventilator to the lungs.

The National Association of Medical Direction of Respiratory Care (1989, Virginia) recommends that a tracheostomy should be performed on patients who require mechanical ventilation 21 days after admission. Clinical practice usually follows this broad guideline.

Griffiths and Barber et al define early tracheostomy (ET) as as a tracheostomy conducted up to seven days after admission to the intensive care unit, initiation of translaryngeal intubation, and mechanical ventilation (2005)". Late tracheostomy (LT) is any time after this. In this study, the researchers analysed data from five studies with 406 participants. These were randomised or quasi-randomised clinical trials, which included adult patients requiring mechanical ventilation. ET was performed on these adult patients. The primary outcome measured was mortality followed by the secondary outcome of length of hospital stay, duration of artificial ventilation and incidence of ventilator-associated pneumonia (VAP).

In their discussion of results, the researchers put forth that ET does not significantly alter mortality or the risk of pneumonia due to the timing of tracheostomy. However, in critically ill adult patients requiring prolonged mechanical ventilation, ET can shorten the duration of artificial ventilation and length of stay in critical care units. The researchers however point out that there are limited number of studies and patients available for analysis and this gap does not allow for 100% accuracy of results.

In the Suzuki and Kusunoki et al study (2013), the researchers surveyed 100 patients needing tracheostomy in the Critical Care Medical Center of Hiroshima Prefectural Hospital from January 2009 to December 2011. The researchers define ET as <10 days after tracheal intubation and LT as >10 days after intubation. Comparing data between ET (49 patients) and LT (51 patients) groups, the researchers conclude that ET reduced the length of weaning after tracheostomy and the time to remove the tracheostomy cannula but found no difference in the length of ICU stay and clinical outcome. The researchers also point out that there is a further need for randomized clinical trials to determine the safety and effectiveness of ET.

Studies supporting ET discuss the benefits in terms of improved comfort and faster weaning from the ventilator. However, conclusive evidence for ET is still lacking.

A 2011 meta-analysis by Fei Wang et al reviewed 7 trials (n=1,044) and concluded that ET does not have any additional benefit though the trend indicated reduced sedation and ICU/Ventilator days.

The TracMan trial published in May 2013 by Duncan Young et al in the Journal of the American Medical Association (JAMA) suggests that ET offers no additional survival benefits. Duncan Young from John Radcliffe Hospital, Oxford, United Kingdom, and colleagues compared early vs late tracheostomy in 909 adult patients at 72 hospitals in the United Kingdom between 2004 and 2011. Patients were randomly assigned to receive early tracheostomy within 4 days of admission or late tracheostomy after 10 days if the procedure was still thought necessary.

The principal findings of this study suggest that ET had no effect on mortality in mechanically ventilated patients and those who received an ET in the first 4 days of admission were likely to require 7 days additional ventilator support. For those in the late tracheostomy (LT) group, only 45% had a tracheostomy procedure. In more than 2/3 of this LT group, a tracheostomy was not required by day 10 because the patients had recovered. Either they were no longer being ventilated or had been discharged from the critical care units.

According to the researchers, the implications, for clinical practice and for patients, from this study are found from the results in the LT group. Not only were there no statistically significant difference in mortality between the 2 groups but, through waiting, an invasive procedure was avoided in a third of patients. It would appear that delaying a tracheostomy until at least day 10 of a patient's critical care unit stay is the best policy. 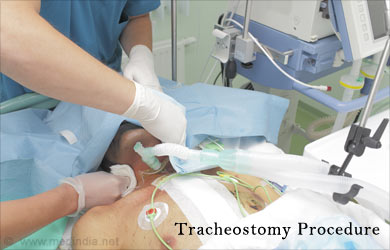 Bronchotomy / Surgical Airway Management
Bronchotomy is a surgical procedure for treating airway obstruction in the larynx, trachea, and bronchi due to injury, infection, or lung problems.

Tracheostomy - Animation
Tracheostomy-Tracheostomy is a surgical procedure of making an incision into the trachea (windpipe) for creating a surgical airway by way of a temporary or permanent opening.