Bronchotomy or surgical airway management is a surgical technique carried out for creating an open airway between the individuals lungs and the outer atmosphere. Bronchotomy is a misnomer term and as it means an incision of a bronchus, however in this procedure the incision is on the larynx section of the windpipe, whereas the bronchus is the section of windpipe after the trachea divides into two and continues as bronchus to left or right lung.

Bronchotomy to access the air passage is rarely used now, however it was popular in the past. Bronchotomy is now superseded by another procedure called tracheostomy This procedure is mainly performed in individuals with an obstruction in their upper respiratory tract. 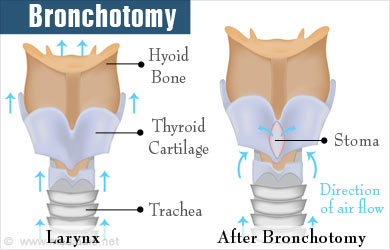 When an incision in made on the larynx to create a permanent airway passage, it is termed as bronchotomy or laryngotomy. This surgical method is considered in an emergency situation. Similarly, a surgical incision made in the trachea of an individual is termed as tracheotomy. Once the access is created a tube is inserted to remove secretions and allow passage of air into the lungs. Rather than breathing through the nose and mouth, the individual starts to breathe through the tube. Thus, this procedure offers an alternative method of breathing for an individual.

In 1718, a German surgeon named Heister coined the term tracheotomy. Later, Negus coined tracheostomy and bronchotomy around 1938 to describe the same procedure. But the history of bronchotomy dates back to the 3600-2000 BC. While the procedure existed, the rate of success was not evident in the procedure.

During last century when disease such as diphtheria caused respiratory obstruction and asphyxia, bronchotomy was being used as a quick procedure to relieve such obstruction. It was also used for creating artificial ventilation where respiratory paralysis was caused by polio infections. In 1546, the first successful bronchotomy procedure was performed by an Italian physician Antonio Musa Brasavola. The first successful bronchotomy in a child was performed in 1808. Since then, there have been modifications to the procedure to improve on the success and avoid secondary infections. As the procedure evolved it was soon realised that tracheostomy gave better results and bronchotomy became less popular and slowly faded out.

Structure of the Airway

When will a Bronchotomy / Tracheostomy be Performed?

We often find individuals getting foreign objects stuck in their throat and for the most part, we see this in young children. It is not rare to find children having swallowed a seed or a nut or even a small toy part and finding it stuck in their throat. A study has observed that a large part of the objects get stuck in the right bronchus followed by the left bronchus, larynx (voice box), and the trachea.

There is a procedure called bronchoscopy where a lighted tube is used to visually examine the airways of the lungs. Although bronchoscopy is used in most cases to detect a foreign object. However if either bronchoscope is not available or the location of the foreign object makes it difficult for the bronchoscope to reach and remove it. In such situations the chest will need to be opened and a small opening maybe required to remove the foreign body. This truly is the modern bronchotomy procedure and is performed in less than 2% of the cases. For bronchotomy an incision is made on the wall of the bronchus. It maybe also be used to remove a small tumor in the section of the bronchus.

A bronchotomy may also need to be performed for lung problems such as diaphragm issues, for long-term respiratory support, injury to the chest wall, or other diseases of the lung.

How is Tracheostomy Performed?

Tracheostomy is a carefully coordinated process between the surgeon, the anesthetic team, and the scrub technicians.

The patient is made to lie down and the neck is placed in an extension to provide good access for the surgery. The neck is first carefully examined and the cricoid cartilage, the thyroid cartilage, and the trachea are identified. It can be difficult to find the exact region of exposure in the neck in short-necked patients who are obese. Other obese patients should be examined with care and the chin should be retracted with a tape for better exposure to the neck. 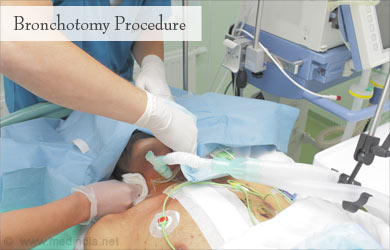 The procedure of electrocautery can be used in patients who do not need high oxygen levels. Before beginning the procedure, the anesthetic team is informed of the level of inspired oxygen that the patient needs to avoid any fire hazards.

The surgeon needs to palpate the neck region and identify the strap muscles that can be divided to detect the thyroid gland below. The surgeon can then move the thyroid gland to the back or side so as to create a space to insert the endotracheal (ETT) cuff. This cuff provides the space for the tracheotomy tube to be placed. The plan for the airway is discussed with the scrub technician and the anesthetic team.

The ETT cuff is used to create the airway that will be the route of air passage for the tracheotomy tube. The tube itself is prepared with a cannula or a tube that can facilitate removal of secretions. Of course, there are different types of cannulae including disposable or non-disposable cannulae. An incision is made in the tracheal rings. The ETT tube is brought out after creating the airway and kept at the tip of the incision while the tracheotomy tube is inserted into the airway, the cuff is inflated, the cannula is replaced, and the ventilator circuit is connected.

What are the Complications of Tracheostomy?

There are different types of complications of Tracheostomy based on the time they appear following the procedure.

Complications that occur during or soon after the surgery include:

Complications that occur at a later time following the surgery include: 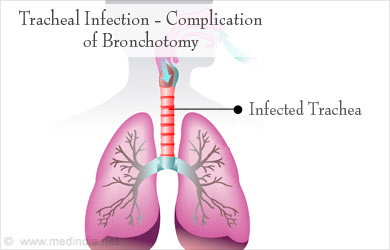 Complications that occur due to the prolonged presence of the tube and the opening are listed below:

What are the Precautions Required for a Bronchotomy?

Some of the precautions necessary for a successful tracheostomy are: 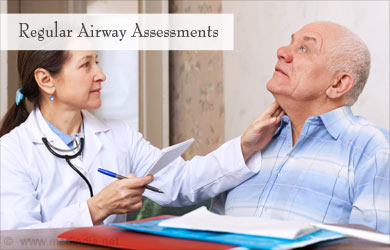 Early vs Late Tracheostomy
A tracheostomy or tracheotomy is a surgical procedure where an opening is created through the neck into the trachea or windpipe to provide direct access to a breathing tube.