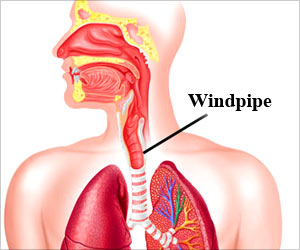 A new technique developed helps in tracheal replacement, where living windpipe structures are being grown to replace the damaged trachea.

Biomedical engineers at Case Western Reserve University are growing tracheas by coaxing cells to form three distinct tissue types after assembling them into a tube structure-without relying on scaffolding strategies currently being investigated by other groups.

Advertisement
‘Surgeons can replace the damaged trachea with a fully functional natural-tissue trachea into the body of both adults and children.’


"The unique approach we are taking to this problem of trachea damage or loss is forming tissue modules using a patient's cells and assembling them like childhood toy Legos into a more complex tissue," said Alsberg, who is leading the research.
Advertisement
This step toward building living windpipe structures from self-assembled modules is explained in detail in the most recent issue of Advanced Science.

The trachea, commonly called the windpipe, is the airway between the voice box and the lungs. Patients may need a rebuilt trachea because of tumor resection or an injury that results in tracheal stenosis, a narrowing or constricting of the windpipe, which inhibits breathing.

Damage to or loss of trachea tissue can be life-threatening or lead to a significantly reduced quality of life, Alsberg said.

Other procedures, such as implanting a stent or simply clearing away tissue obstructing the airway, offer only short-term relief as the repaired tube tends to close off again after about a year.

Recent tissue-engineering approaches using synthetic or natural materials as scaffolding for cells have been met with challenges.

Difficulties have included uniformly seeding cells on the scaffolding, recreating the multiple different tissue types found in the native trachea, tailoring the scaffolding degradation rate to equal the rate of new tissue formation, and recreating important contacts between cells because of the intervening scaffold.

The trachea engineering strategy now being pursued at Case Western Reserve, however, wouldn't have those problems because it doesn't rely on a separate scaffold structure, Alsberg said.

According to Alsberg's research, a new trachea replacement must do three critical things to function properly:

1. Maintain rigidity to prevent airway collapse when the patient breathes;
2. Contain immunoprotective respiratory epithelium, the tissue lining the respiratory tract, which moistens and protects the airway and functions as a barrier to potential pathogens and foreign particles; and
3. Integrate with the host vasculature, or system of blood vessels, to support epithelium viability.

The self-assembling rings developed by the Alsberg and Rolle labs meet all three of those requirements because they can fuse together to form tubes of both cartilage and "prevascular" tissue types. Prevascular refers to tissues potentially ready to participate in the formation of blood vessels, though not yet functional in that way. The cartilage rings are formed by aggregating marrow-derived-stem cells in ring-shaped wells. Polymer microspheres containing a protein that induces the stem cells to become "chondrocytes," or cells that form cartilage, are also incorporated into the cell aggregates.

Rolle said it is the combining of those two things-the self-assembled tissue ring modules and the polymer microspheres-that "makes it possible to create the complex multi-tissue structure that makes up the trachea."

The prevascular rings are comprised of both these marrow-derived stem cells and endothelial cells, the thin layer of cells that line the interior of blood vessels.

The researchers then coat the tubes with epithelial cells to form multi-tissue constructs that satisfy all of those requirements: cartilage provides rigidity, epithelium serves the role of immunoprotection and the vascular network would ultimately permit blood flow to feed and integrate the new trachea tissue.

Using this method, Alsberg, Rolle and their team have been able to engineer highly elastic "neo-tracheas" of various sizes, including tissues similar to human trachea. When these tracheas were implanted under the skin in mice, there was evidence the prevascular structures could join up with the host vascular supply.

"The hope is that a surgeon could implant the tissue tube into the body and it will grow and incorporate into the existing tissue," Alsberg said. "We're excited about this approach, as it may have broad applicability to bottom-up engineering of many other complex tissues and organs."

Bag-Mask Ventilation Fails to Improve on Endotracheal Intubation in Cardiac Arrest
Each year it causes 300 000 deaths in the US and more than 200 000 in Europe. Less than 10% of ......