Arthritis is a group of conditions that involves inflammation and pain in the joints. It typically occurs in joints of the body. It can affect other tissues in the body too. Arthritis can lead to joint weakness and physical ailments that can interfere with the daily activities. The pain associated with arthritis varies in severity. If it comes and goes, it is called episodic pain. When it is chronic, one would feel the pain most of the time. 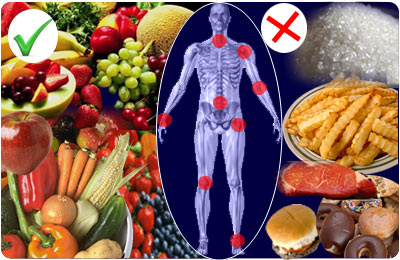 Arthritis is a group of condition with similar manifestation but have different cause. The usual forms of arthritis are as follows:

The value of nutrients in arthritis is not so well known and its knowledge can help in reduction of symptoms and decrease the requirement of daily medication. The dietary guidelines for people with arthritis include foods rich in natural anti-inflammatory, antioxidant, and joint-supporting nutrients, and avoiding pro-inflammatory foods that are high on sugar, saturated fats, and trans-fatty acids.

So, if you are suffering from arthritis Consume:

New findings indicate that grains could encourage the development of rheumatoid arthritis wherein the immune system attacks the bodys own joints. Cereal grains are known to contain substances called as lectins. Grains could trigger lectin secretion from the gastrointestinal tract leading to an immune response and affecting the joints.

According to the lead researcher Cordian at the Colorado State University in Fort Collin the findings need to be further researched. Cereals being the bulk of our diets should only be given up or replaced if an allergy for any cereal is suspected and confirmed. Any suspect food could be eliminated for a period of time to be able to identify the causal food.

If a wheat protein allergy exists than other grains like rice, millets, buckwheat, quinoa could be consumed. Dairy protein allergy should also be looked for. Milk and milk products have to be avoided if the latter exists in people affected by Rheumatoid arthritis.

Apart from the food allergies it is essential to focus on a vegetarian diet, cut down on saturated fats, consume omega 3 rich foods, lose weight and exercise.

In short, people with arthritis should identify and avoid foods that trigger inflammation. Also it is beneficial to lower the daily caloric intake for pain-free living.

Latest Publications and Research on Diet, Nutrition and Supplements for Osteo-Arthritis and Rheumatoid Arthritis

Study Unveils Benefits of Fish Oil on Arthritis
Fish oils are known for their beneficial health effects, but how and why they produce anti-inflammatory effects remains uncertain.

Arthritis Patients may Benefit from Mediterranean Diet
A study suggests that people with rheumatoid arthritis improve their symptoms, by learning how to eat Mediterranean style.

What is arthritis?
The pain in the joints can be effectively eased through the practice of yoga, which gives flexibility to the joints and strength to the muscles of the body parts

Quinoa
Quinoa, a high fiber, mineral rich pseudo-cereal, is fast becoming popular as a superfood all over the world because of its multiple health benefits.

Top 10 Health Benefits of Dragon Fruit
Learn about dragon fruit health benefits along with the use of dragon fruit in face packs and recipes.

Polyarthritis
Polyarthritis refers to pain in four or more joints simultaneously due to various causes ranging from infection to autoimmune cause. It may be acute or chronic lasting over six weeks. Treatment aims to reduce pain and inflammation
Sign up for Wellness Consult a Doctor Sign up for Selfcare
Advertisement
Health Topics A - Z
A B C D E F G H I J K L M N O P Q R S T U V W X Y Z