What is Beriberi Disease?

Beriberi is a disease caused due to deficiency of thiamine. Thiamine or vitamin B1 is a water-soluble vitamin, which acts as a coenzyme for several metabolic pathways. The recommended daily intake of vitamin B1 is 1.2 mg.

The human body cannot produce thiamine and depends on external sources. Only 30 mg can be stored in the tissues. Thiamine is mostly concentrated in the skeletal muscles. It is also found in the heart, liver and kidneys. Thiamine is excreted through the kidney.(1Beriberi

Beriberi is mostly found in developing countries where people may not be able to access a diet rich in vitamin B1. Certain foods are known to destroy thiamine. Tea, coffee, betel nuts and processed foods contain anti-thiamine factor, which destroys thiamine. 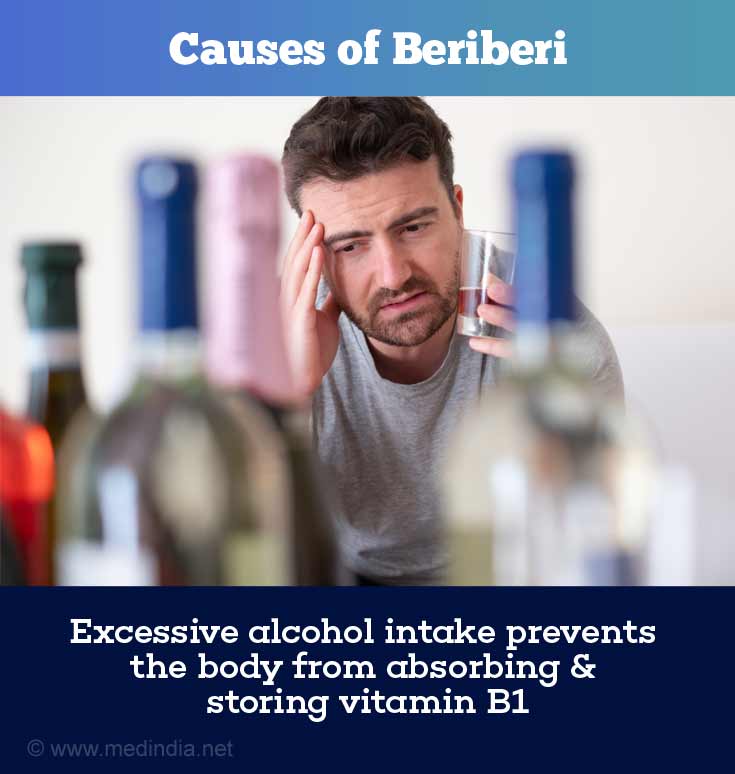 Other conditions that cause beriberi include:

What are the Symptoms of Beriberi Disease?

A mild deficiency of vitamin B1 can cause symptoms like fatigue and increased irritability.

Beriberi is of two types, wet beriberi and dry beriberi.

Wet beriberi can affect the heart and in serious cases cause heart failure. Symptoms of wet beriberi include: 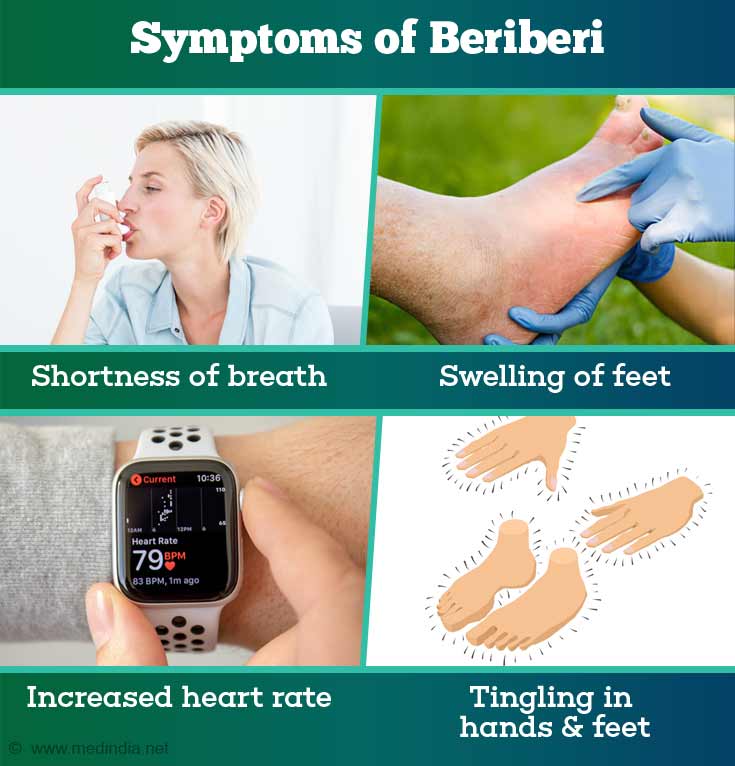 Dry beriberi affects the musculoskeletal and nervous system. It damages the nerves and leads to loss of muscle strength eventually leading to muscle paralysis. Symptoms of dry beriberi include:

In extreme cases of dry beriberi, a brain damaging condition called Wernicke Korsakoff syndrome can occur. This can lead to permanent mental impairment if not treated on time.(3✔ ✔Trusted Source
About Beriberi

How to Diagnose Beriberi Disease?

Diagnosis of beriberi is based on the history and physical features of the patient, and diagnostic tests.

Signs in a patient with beriberi include: 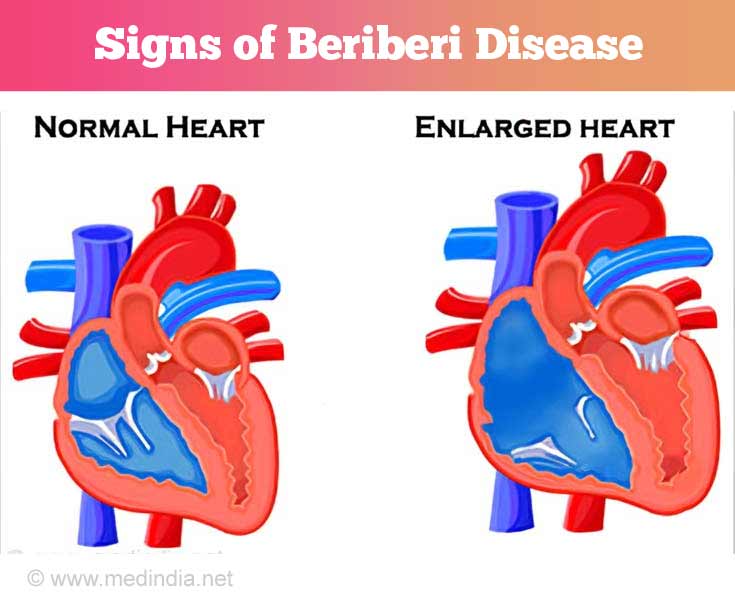 Tests that may be required to confirm the diagnosis include:

What are the Treatments for Beriberi Disease?

Doctors usually prescribe thiamine in either tablet/injection form depending on the severity. In some cases, intravenous thiamine may be needed.

Repeated blood tests may be required to measure the level of the vitamin to check if the body is absorbing the vitamin. Doctors also recommend a thiamine-rich diet, which includes whole grains, eggs, nuts, seeds, and tomato or orange juice. (5✔ ✔Trusted Source
Vitamin B1 Thiamine Deficiency (Beriberi)

Often other vitamins like B12 are also given as supplements.

If treated early, the prognosis is usually good with patients recovering and integrating into normal life activities. Though heart damage is reversible, acute heart failure has low chances of recovery.

If caught early, damage to the nervous system is reversible. However, issues like memory loss and confusion may remain when treated late.

If beriberi progresses to Wernicke Korsakoff syndrome, brain damage can be permanent.

Beriberi if untreated or severe can lead to death.

How to Prevent Beriberi Disease?

A balanced, healthy diet rich in whole grains and legumes is helpful in maintaining vitamin levels. Pregnant and lactating mothers should check their vitamin B1 levels from time to time. People who consume alcohol in excess should also keep a check on their vitamin levels.(6What is Beriberi?

Thiamine (Vitamin B1) This medication is a water-soluble vitamin of the B complex, prescribed for thiamine deficiency, beriberi and acute alcoholic intoxification. ...

Top Ten Interesting Facts about Vitamin Deficiency Medindia lists some interesting facts on vitamins for you to know their significance in maintaining good health and the impact of vitamin deficiency.

Vitamin B1 Deficiency can Cause Brain Damage A potentially fatal brain disorder called Wernicke encephalopathy can be caused by deficiency of a single vitamin, B1 (thiamine).