Infantile beriberi is more common in Southeast Asia due to poor sources of thiamine in the mother's diet. Supplementation of thiamine-fortified fish sauce to pregnant and lactating women can improve their blood thiamine concentrations, thus preventing infantile beriberi.

Thiamine (vitamin B1) is a water-soluble micronutrient which plays a crucial role in the energy metabolism for growth, development and function of cells. Thiamine is found in whole grains, beans, bread, meat, and fish. Thiamine deficiency occurs when the diet mainly consists of polished rice and wheat flour, which are poor sources of thiamine.


Thiamine can also be lost when the rice is washed or when the cooked rice water is discarded. Thiamine deficiency in Southeast Asia is due to the large scale production and distribution of milled rice. The requirement of thiamine increases when the diet is rich in carbohydrate. Eating a thiamine-deficient diet for two to three months can lead to disability and death. Thiamine deficiency is more common among pregnant women who have increased demands for thiamine.

Thiamine deficiency remains a public health concern in countries that rely on polished rice which is a poor source of thiamine. Lack of thiamine in the mother's diet causes beriberi in infants (infantile beriberi), leading to heart failure and death. Infantile beriberi is characterized by vomiting, convulsions and signs of heart failure. The disorder could be fatal if not treated within 24 hours.

Fish sauce is widely used as a condiment in Cambodia. Thus, fish sauce was fortified with higher concentrations of thiamine. A clinical trial was conducted among rural Cambodian women to study whether consumption of thiamine-fortified fish sauce for six months could help combat infantile beriberi.

Researcher Timothy J. Green, Ph.D., of the South Australian Health and Medical Research Institute, Adelaide, Australia, along with coauthors conducted the clinical trial. The researchers studied whether the fish sauce fortified with higher and lower concentrations of thiamine would improve the levels of erythrocyte thiamine diphosphate concentrations (eTDP), a marker of thiamine status.

The results of the clinical trial showed that the levels of eTDP were higher among lactating women who consumed thiamine-fortified fish sauce and their breastfed infants than those in the control group.

The limitations of the study included lack of normal levels of eTDP for women due to variability in the cutoff value. Fish sauce has already been fortified with iron in Cambodia and Vietnam. So, the authors considered fortifying fish sauce with thiamine throughout Southeast Asia.

The authors concluded that "more research designed to enable a large, pragmatic randomized clinical trial is required to address some of the limitations of this efficacy trial, in particular, optimizing the level of fortification and acquiring clinical diagnoses of infantile beriberi."

The findings are published in the JAMA Pediatrics.

Health Benefits of Broad Beans
Broad beans or fava beans are a good source of protein and carbs. They are beneficial for heart and bone health, improve symptoms of anemia and aid in weight loss. Find out more about the health benefits of broad beans and how to enhance your diet ...
READ MORE 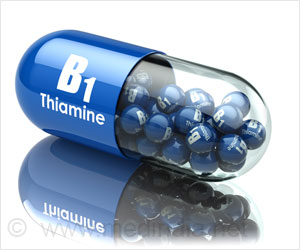 Vitamin B1 (Thiamine)
Vitamin B1 or thiamine is a B complex, water-soluble vitamin necessary for brain, heart, nerve and eye health. Vitamin B1 deficiency can cause beriberi.
READ MORE

Fish Health BenefitsFish: The Best and The WorstSeven Surprisingly Healthy FoodsBeriberi DiseaseVitamin B1 (Thiamine)Health Benefits of Tuna Fish
Sign up for Wellness Consult a Doctor Sign up for Selfcare