It is a rare, aggressive and deadly cancer of the mesothelial tissue lining the internal organs and is incurable in most of the cases.

Mesothelioma is a type of rare cancer that develops in the mesothelium-a thin layer of tissue that surrounds many of the internal organs such as the lungs, heart and testis. A cancerous tumor of the mesothelium is called a malignant mesothelioma, but is generally referred to as mesothelioma. It is an aggressive form of cancer.

According to the National Asbestos Profile of India by The Occupational and Environmental Health Network of India (OEHNI) published on April 28, 2017, fifty five countries have banned the use, trade, import, mining, manufacturing and other economic activities related to asbestos. In spite of adequate evidence about the role of asbestos in mesothelioma, India is one of worlds largest importers of asbestos. In 2014-15, India has imported over 396,493 tons and by 2017, it is expected to rise by 605,000 tons with 9% growth. During 2009-2012, 21 cases of mesothelioma were reported at the Gujarat Cancer Research Institute, Ahmedabad while in 2013, in just one year, 23 cases of mesothelioma were diagnosed.

What are the Types of Mesothelioma?

Mesothelioma can be divided into different types on the basis of its location, types of cells involved and the presence of malignancy.

a) Mesothelioma type by location: The most common way to classify mesothelioma is based on the location of the cancer.

b) On the basis of cell types:

What are the Causes of Mesothelioma?

Generally, when asbestos fibers are inhaled, they get lodged in the lining of the lungs or the heart. They enter the abdomen when they are cough up from the lungs and swallowed. They cause inflammation that finally leads to the development of mesothelioma.

Asbestos is a generic name for six types of silicate minerals that share common properties. Asbestos can cause DNA damage both directly as well as indirectly. Asbestos impedes the process of mitotic cell division leading to cellular damage and mutation. Further, asbestos also causes mesothelial cells to release reactive oxygen and nitrogen species, the agents that also cause mutation.

Usually, it takes 10-50 years for mesothelioma to develop after the asbestos exposure. This is one of the reasons why mesothelioma cases continue to appear in the countries even where asbestos has been banned. However, in few cases, the latency period is quite shorter and this is supported by the findings of mesothelioma in children and young teenagers.

In 80% of the cases, asbestos exposure is the cause of mesothelioma. However, recent studies have shown the role of certain environmental risk factors contributing to mesothelioma symptoms. In 2016, the case of a 60-year-old patient with mesothelioma without any prior exposure to asbestos has been reported. 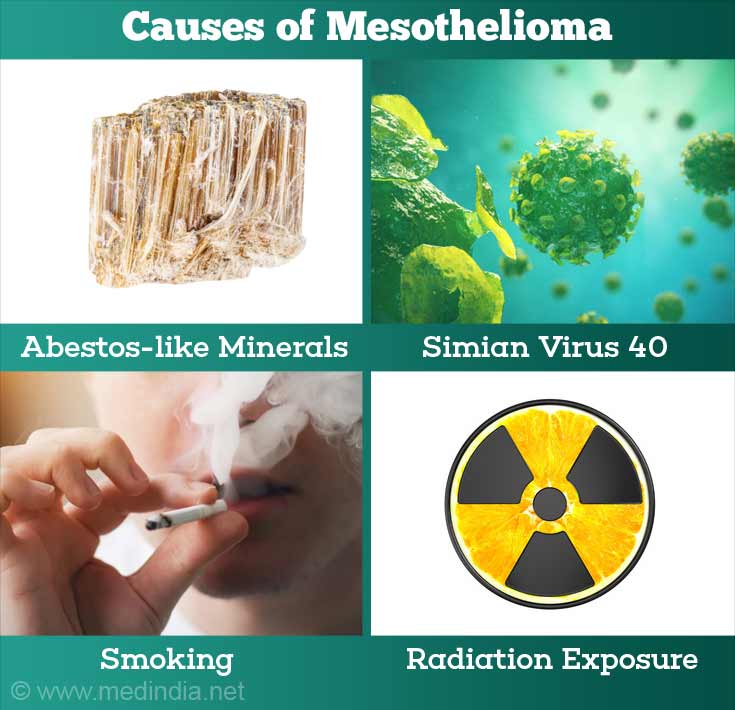 What are the Symptoms of Mesothelioma?

In its early stages, mesothelioma does not have many symptoms. Most of the symptoms are caused by the growing cancer and the pressure it exerts on a nerve or other body organ.

The symptoms of pleural mesothelioma are persistent cough, tiredness, chest pain, loss of appetite, shortness of breath, sweating and high temperatures, losing weight, difficulty in swallowing, a hoarse or husky voice, and in some cases, changes in the shape of the fingers and nails (known as finger clubbing).

Patients suffering from pericardial mesothelioma experience difficulty in breathing and chest pain whereas mesothelioma of testis can be first detected as swelling or a mass on a testicle. 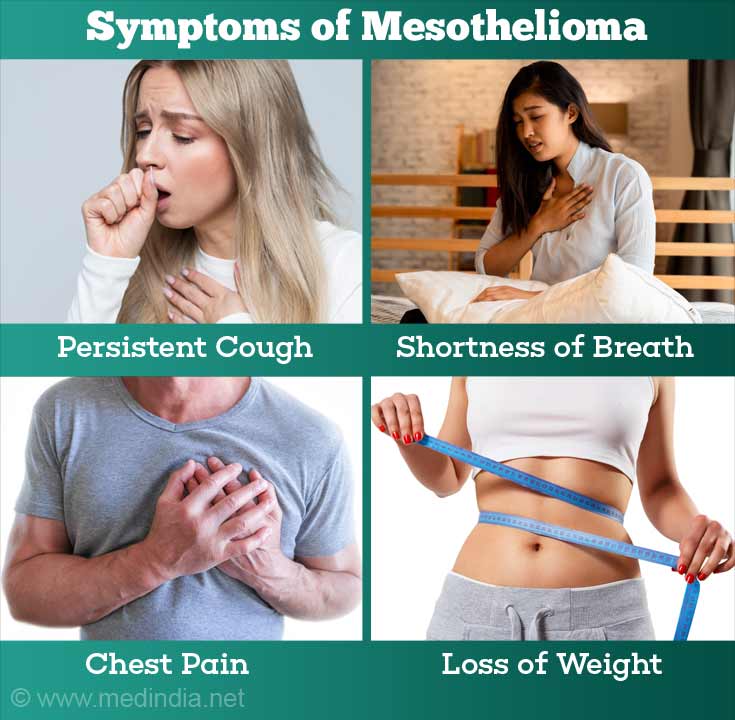 How do you Diagnose Mesothelioma?

Patients with the above symptoms should visit a doctor. The diagnostic tests consist of imaging tests, blood tests and biopsies.

Blood tests: These tests look for the presence of biomarkers which are found to be elevated in people with mesothelioma. The biomarkers that may be measured include:

In addition, the measurement of biomarkers such as osteopontin, interleukin-6 (IL-6), mesothelin, 8-hydroxy-2′-deoxyguanosine (8OHdG), vascular endothelial growth factor-beta (VEGF-β), and estrogen receptor beta (ERβ) also have proven to be useful in detecting mesothelioma or monitoring the effectiveness of treatment.

Biopsies: These tests can reveal whether a growth is cancerous, where in the body the cancer originated and what type of cells are involved. There are several ways by which biopsies are performed such as fine-needle aspiration, incisional/core and excisional biopsy. The biopsy may be performed through procedures like a thoracoscopy or a mediastinoscopy.

Immunohistochemistry: The presence of markers such as calretinin, podoplanin (PDPN), EMA (epithelial membrane antigen) in a membranous distribution, mesothelin, WT1 (Wilms' tumour 1), cytokeratin, HBME-1 (Human mesothelial cell), or osteopontin in the biopsy sample could suggest the presence of mesothelioma.

The analysis of pleural fluid is usually not useful in the diagnosis of mesothelioma.

How do you Treat Mesothelioma?

It is quite challenging to treat mesothelioma patients. The important factors determining a mesothelioma treatment plan include the primary site affected, the cell type of the cancer, whether the cancer is localized to the chest or has spread to the chest wall, diaphragm, or lymph nodes, as well as the age and overall health of the patient.

Surgery: For patients with an early-stage mesothelioma diagnosis, surgery can be used to remove the mesothelial lining, one or more lymph nodes, or part or all of a lung or other organ. Sometimes, it works as palliative as it relieves the symptoms of mesothelioma, without aggressively treating the disease. In pleurectomy / decortication, the pleura is removed along with the cancers, while in extrapleural pneumonectomy, the lung and pleura are removed along with other affected parts.

Radiotherapy: The efficacy of this treatment is limited as irradiation with a high radiation dose to an extensive tumor area can cause severe adverse effects such as pneumonitis, myocarditis, and myelopathy due to spinal cord toxicity. It is therefore mostly used for palliative purposes or in combination with surgery.

Photodynamic (PDT) therapy: It is a light-based cancer treatment which requires the interaction of a photosensitizer, oxygen, and light and these three together induce a tumoricidal photochemical reaction. Recently, it was shown that PDT offers an improved survival but it has to be confirmed by a randomized clinical trial.

Chemotherapy: Cisplatin and pemetrexed, an antifolate combination chemotherapy are the current preferred treatment for mesothelioma. Gemcitabine can be combined with pemetrexed in patients who cannot take cisplatin. Other combinations that have been tried out include cisplatin/doxorubicin/mitomycin C, bleomycin/intrapleural hyaluronidase, cisplatin/doxorubicin, carboplatin/gemcitabine, and cisplatin/vinblastine/mitomycin C. 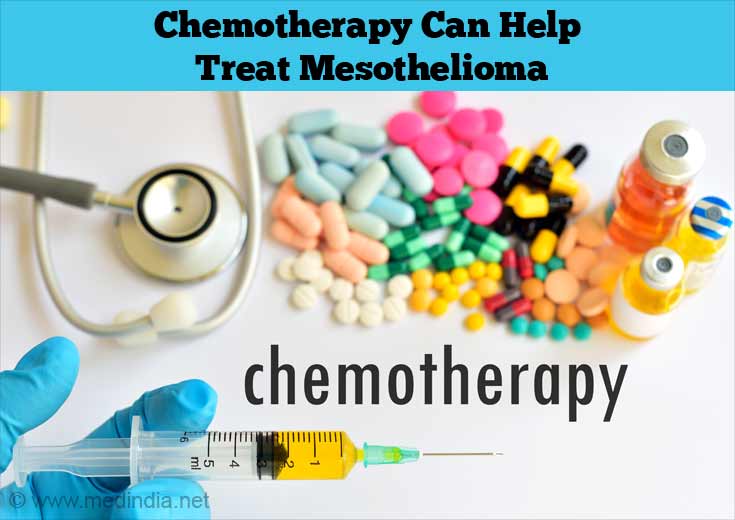 Immunotherapy: This type of treatment is more specific and targeted than the chemotherapy and spurs the patients own defenses to fight the cancer.

Recently, it was observed that two young women with papillary peritoneal mesothelioma with widespread recurrence received platinum-pemetrexed chemotherapy along with apitolisib, a dual phosphoinositide 3-kinase-mammalian target of rapamycin (PI3K-mTOR) inhibitor. Both the patients are alive and well 1013 years after the diagnosis. This study identifies the use of targeted therapies with PI3K-mTOR-based inhibitors as a novel approach, warranting further clinical assessment.

Other immunotherapy drugs that show promise in the treatment of mesothelioma are pembrolizumab, tremelimumab, bevacizumab and atezolizumab.

How do you Prevent Mesothelioma?

What is the Prognosis for Mesothelioma?

The prognosis for mesothelioma is quite poor, with majority of patients living less than 1 year after the diagnosis is made. Based on data from the National Cancer Institutes SEER program, the relative 5-year survival rate for mesothelioma is 5-10%. People diagnosed at a younger age tend to survive longer. The prognosis can be improved by starting treatment as soon as the diagnosis is made and leading a healthy lifestyle.

Some factors affect the prognosis such as:

Good general health and physical fitness will help to tolerate the side effects of cancer treatments and live better.

Latest Publications and Research on Mesothelioma

Cisplatin
This medication is a platinum-based chemotherapy agent, prescribed for ovarian cancer, bladder cancer and metastatic testicular tumors either alone or with other ...

Pemetrexed
This medication is an (antifolate) antineoplastic agent, prescribed for mesothelioma (cancer that develops from the protective lining of the internal tissues) and certain types of non-small cell lung cancer either alone or with other ...

Pleurectomy - Surgical Procedure
There is a lining between the lungs and chest wall known as Pleura. The dismissal of pleura by a surgical procedure is called Pleurectomy.
Sign up for Wellness Consult a Doctor Sign up for Selfcare
Advertisement
Health Topics A - Z
A B C D E F G H I J K L M N O P Q R S T U V W X Y Z