Alcohol often has detrimental interactions with prescription medicines, Over the Counter (OTC) products and even herbal products, which could be dangerous and life threatening. These interactions can affect the availability of drug at site of action, by altering the drug metabolism, which could result in serious effects. The extent of interaction(s) vary with the quantity of alcohol consumed and the time gap between alcohol and medication consumption.

The risks or danger associated with these alcohol-drug interactions include internal bleeding, heart problems and difficulties in breathing.

Women and older people are at higher risk of harmful alcohol-drug interactions.

Effects of Alcohol on Drug(s)

Alcohol is a essentially a depressant drug that can reduce a persons ability to think rationally. Alcoholic drink or alcoholic beverages usually refers to drinks such as beer, wine or spirits that contain ethyl alcohol (such as whiskey, vodka, rum or gin - commonly referred to as alcohol).

Short and long term side effects of alcohol include:

Absorption, Distribution and Metabolism of Alcohol in body:

Absorption in blood stream - When alcohol is ingested, it is absorbed into the blood stream, and then rapidly distributed to all parts of the body, including brain, within a few minutes. The rate of absorption depends on a number of factors, including:

Distribution in the body - Alcohol that has not been eliminated by first-pass metabolism enters the systemic circulation and is distributed throughout the body.

Metabolism in the liver - Metabolism of alcohol take place primarily in the liver, where it is converted to a non-toxic substance. The liver can only metabolize a certain amount at a time, leaving the excess circulating throughout the body. Thus, intensity of alcohol effect on the body is directly related to the amount consumed.

What are the Common Drug Interactions with Alcohol?

People who consume alcohol, in small or large quantities, are likely to take medications, at some point. A large number of medications have the potential to interact with alcohol. Hence, it is important to be aware of the alcohol-drug interactions.

Typical alcohol-drug interactions include the following:

List of Drugs and their Interactions When Taken With Alcohol

What are the Effects of Alcohol on Each Drug Class?

The effect of alcohol on some drug classes are given below:

Antibiotics and Alcohol: Effects of alcohol on antibiotics vary with the type of antibiotic; for example, the antibiotic

Non-narcotic pain medications and Alcohol: Several potential interactions exist between alcohol and painkillers, which vary with the type of pain killer; for example,

Sedatives / Hypnotics and Alcohol: Medications under the category of Benzodiazepines, e.g. Diazepam, are generally prescribed to treat anxiety and insomnia, also known as sleeping pills. These medications may cause severe drowsiness in the presence of alcohol, thus increasing the risk of household and automotive accidents.

Anti-hypertensives and Alcohol: Alcohol is known to cause an elevation in blood pressure. Hence, blood pressure medication and alcohol interactions must be closely watched in patients diagnosed with high blood pressure.

Over-the-counter (OTC) and Alcohol: (OTC) products are non-prescription medications and widely used. Some OTC products, like mouthwashes and cough syrups, tend to have high alcohol content in the product, which could lead to increase in alcohol levels, in drinkers.

How do you Diagnose Alcohol-Drug Interaction?

One must maintain a record of symptoms, when consuming medications, especially if the person drinks alcohol. The following symptoms may indicate an alcohol or medication related problem.

In addition, alcohol abuse and alcoholism can be diagnosed by conducting screening tests, using a type of questionnaire, to understand if patient has probability of exhibiting alcohol-drug interaction.

How to Treat Alcohol-Drug Interaction?

What are the Preventive Methods to Avoid Alcohol-Drug Interactions?

In order to prevent any potential alcohol-drug interactions, the patient must:

As a precautionary measure, people consuming medications must read the product warning label, for information on interactions.

Similarly, healthcare providers should be alert regarding the potential interaction between alcohol and medicaments and guide patients accordingly.

Latest Publications and Research on Drug Interaction with Alcohol 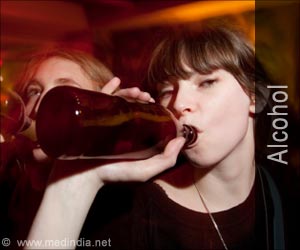 Quiz on Alcohol
Alcohol consumption for recreation and relaxation has become a universal culture. But do you think you know enough about this drink - Take this quiz and find ...
READ MORE

Alcohol Effects on the Body
Alcohol affects the body both in moderate and severe doses. Although it is considered a stimulant it basically is a depressant.
READ MORE

Drugs for Drug Interaction with Alcohol