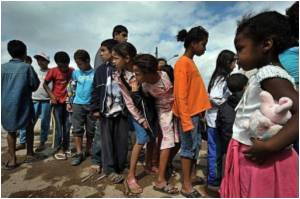 The UN's chief met the ecumenical patriarch of Constantinople on Friday as the UN food agency was looking for support from world religious leaders in the fight against global hunger.

"Eradicating hunger not only makes economic and political sense, it is also a moral issue," Food and Agriculture Organisation director-general Jose Graziano da Silva was quoted in a FAO statement as saying at the meeting.

On 'Satyamev Jayate', Aamir Khan recently spoke about the harmful effects of pesticides and requested the Central and the state governments to adopt organic farming method.
Advertisement

The FAO chief met Bartholomew I, a noted environmentalist, in Istanbul.

With hunger hounding developing nations and obesity rapidly becoming a global epidemic, all efforts by governments, scientists, NGOs, corporate target these twin nutrition-related crises.
Advertisement
In his letter to the mosque's Grand Imam Sheikh Ahmed Mohamed el-Tayeb, Graziano da Silva asked for support in efforts to eradicate global hunger and informed him of FAO's activities in the drought-prone Horn of Africa.

"We must achieve global food security in order to have a more secure world," Graziano da Silva was quoted as telling the grand imam.

Similar letters will be sent to other religious leaders, the FAO said.

In June, Graziano da Silva was received in a private audience by Pope Benedict XVI in which he called for "renewed support of the Catholic Church in the fight against hunger at the global and local levels".

A new 'anti-hunger' powder that dieters can just mix into curds or smoothies for freedom from the pangs of hunger is on the anvil.
Advertisement
<< Delhi's First Bone Marrow Transplant Case from Unrelated Do...
Ways to Eliminate Wasteful Tests and Procedures Identified >>

Indian Medical Journals Calculate Ideal Weight for Infants Nutam (400mg) (Piracetam) Blood Pressure Calculator Diaphragmatic Hernia Accident and Trauma Care Iron Intake Calculator Noscaphene (Noscapine) The Essence of Yoga Sinopril (2mg) (Lacidipine)
This site uses cookies to deliver our services. By using our site, you acknowledge that you have read and understand our Cookie Policy, Privacy Policy, and our Terms of Use