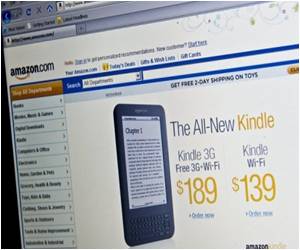 Amazon.com on Friday announced that the three "Hunger Games" books has surpassed the Harry Potter series to become the best-selling book series of all time.

"Since debuting in 2008, Katniss Everdeen and the Hunger Games have taken the world by storm, much as Harry Potter did a decade before," said Amazon.com books and Kindle editorial director Sara Nelson.

Amazon, the online books giant is having to give some answers after facing flak over making big bucks selling offensive e-books on topics ranging from bomb-making to growing drugs.
Advertisement

The trilogy by Suzanne Collins about children forced to fight for their lives in a Roman circus-style televised blood sport in a dystopian world has outsold "Potter" even though J.K. Rowling wrote seven books about a boy wizard.


"To achieve this result in just four years is a great testament to both the popularity of the work and, we think, the growth in reading digitally during that time," Nelson said.

"Hunger Games" titles have consistently made it into Amazon.com's Top 10 lists in print and in digital format for the Seattle-based firm's Kindle electronic readers.

Online retailer Amazon.com has come up with a procedure, which will allow recipients to stay away from undesirable gifts and save millions of dollars spent on repacking, labeling and shipping.
Advertisement
<< Low Hormone Levels Increase Metabolic Syndrome Risk: Study
Flexible Smart Gloves can Trick Brain by Stimulating Sens... >>

Online groups are now springing up to scour the bookshelves of Amazon and protest in case of any other offensive material on sale there.