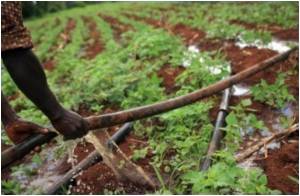 On 'Satyamev Jayate', Aamir Khan recently spoke about the harmful effects of pesticides and requested the Central and the state governments to adopt organic farming method. Aamir has put forward a solution, waking up the cries of farmers. The solution will surely bring back life to our agricultural fields.

Providing testimony to Aamir's claim is a farm in Madhya Pradesh that proudly flaunts its fertile expanse of 12 acres and the unique method that can help overcome the suicidal trend among the farmers of the state, perhaps of the country. The sole but strong characteristic of the Titus Farm that differentiates it from the rest is the use of natural methods to grow, to let grow.

Three kilometres from Hoshangabad, Madhya Pradesh, on the road to Bhopal, lies the Titus Farm where for the last twenty five years, a unique experiment of natural farming is being done here by a local farmer, Raju Titus, who abandoned traditional plough-based and chemical methods of farming in his farms. He favours farming without tillage, known as "No-Till" farming. By doing so, Raju attracted the attention of people who come from across the country to see the experiments he has done with natural farming.


In November last year, three farmers committed suicide in Hoshangabad. Perturbed by the suicides, Raju feels that days of chemical farming are over. Excess use of chemical fertilizers, insecticides and unnecessary tillage of the land leaves soil susceptible to erosion and leads to agricultural runoff.

Sataymev Jayate Sunday episode takes up the practise of greed and corruption among the medical profession and pulls up bodies such as MCI.
Advertisement
Irrigation by Tawa Dam created hope initially, but now, the dream has been transformed into a nightmare. This year, the crop of Soybean in Hoshangabad was completely destroyed, producing only two quintal of soybean per acre. In such situations, alternative farming is what we need to think of. Farmers disappointed with all the "revolutionary" methods of cultivating crops are attracted towards this promising idea of natural farming.

One part of his farm, where wheat has already been sown, is covered with Green Ground Cover made of weeds. Here, Raju has covered the field with paddy straw along with Gajar Ghass (Carrot Grass). Once the sunlight reaches the seeds, filtered by the green ground cover, the young wheat saplings will grow out, celebrating life.

Proud of his experiments, Raju shares, "Covering the fields with weeds and grass gives birth to microbes, earthworms and insects which bore holes in the soil and make it softer and porous. It collectively increases the fertility of the soil, resulting in a good harvest."

Natural farming increases the fertility of the soil, whereas in chemical farming, it is on a constant decline, till there comes a point when the soil is rendered completely infertile. The organic fertilizer, the carbon, formed inside the soil is lost in the air after tillage as the soil's organic matter is broken down more rapidly. This increases the carbon dioxide level in the atmosphere, thus contributing to the global warming. A no-tillage technique gives hope for a solution to a worrying global problem.

Raju Titus has 13.5 acres of land, of which twelve acres are used for farming. On eleven of this 12-acre farm, there is a dense forest of Subbool (Australian Agesia) which is a type of fodder for the animals and a good source of wood. Only one acre is used for agricultural purposes, that too without following the popular practices.

Raju's farming is dictated by his requirement, not by what the market requires. He explains, "One acre of land is sufficient for our need. We get foodgrains, fruits, milk and vegetables from it, which is sufficient for the need of our family. We sow wheat in winter, corn and green gram in summer and paddy in rain."

The steps he is following for the last twenty-five years are of a famous Japanese agricultural scientist Masanobu Fukuoka, who practiced natural farming for years and wrote a book 'One Straw Revolution'. This natural agricultural practice is also believed to be popular in the United States of America.

Typically considered to be the enemy of the crops, weeds are the backbone of natural farming. Raju has developed a friendly relationship with the weeds as they create the green zones in the field. When asked if these plants harm the crops, Raju replies, "Not at all," adding, "The roots of these plants and trees go deep thus strengthening the soil. The crops grow well under the shades of trees and plants. It also depends on how fertile your land is. Since our lands are fertile, the shade of trees doesn't adversely affect the crops."

It is natural to believe that no-till farming is tough. People who hear of the methods adopted as a part of this natural farming usually tend to disbelieve. But seeing Raju's farm, the sceptics come away convinced.

Natural farming is a way of life. It is an idea that can wipe out hunger as well as give life to other living beings and organisms. It provides pure air and water, creating equilibrium in the environment. It is called Rishi farming, named after the natural lifestyle of the Rishis whose intake comprised roots, fruits and milk. They grew high productivity food grains on a very small patch of land. They only sowed as much as they required, and no more. And natural farming showed the way.

The Charkha Development Communication Network feels that perhaps the answers to global hunger lie in this earthy solution. By Baba Mayaram

Why does your Stomach Growl with Hunger
News Archive
News Resource
Advertisement
News Category
JUUL E-Cigarettes Banned from US Market Busy Americans Get The Least Sleep At 40 Years Deepika Padukone Rushed To Hospital After Sudden Chest Pain Vegans, Vegetarians and Fish Eaters Have Better Memory Than Meat Eaters How to Reduce the Risk of Acute Kidney Injury By Drinking Coffee?
More News
Sign up for Wellness Consult a Doctor Sign up for Selfcare