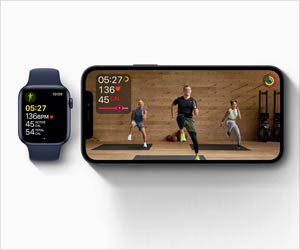 Apple is adding a new audio feature for its Fitness+ subscribers called 'Time to Walk' in the Workout app. In the app, guests share inspiring stories while walking.

According to MacRumors, Apple Fitness+ subscribers will be able to open the Workout app on an Apple Watch, select 'Time to Walk' and choose from one of the audio stories to listen to during their walk.

Apple Watch Series 6 has a reliable Blood Oxygen sensor, which helps measure the oxygen saturation of the blood. The app was developed to keep track of respiratory problems that are increase in North India.
Advertisement
‘Apple Fitness+ provides workouts that can be done on an iPhone, iPad, or Apple TV, with the Apple Watch tracking fitness progress.’

The feature is likely to be extended to wheelchair users too.


According to the report, the settings for 'Time to Walk' started showing up weeks ago in earlier betas of watchOS 7.3 and iOS 14.4, the stories are not yet accessible.

Alternatively, it is also included in the Apple One Premier plan, along with Apple's music, TV, gaming, news and cloud storage services.

The marketing of a new device named Nightware that uses Apple Watch to reduce sleep disturbance related to nightmares has been permitted by the US Food and Drug Administration (FDA).
Advertisement
<< Microsoft Founder Bill Gates Receives First Dose Of Covid Va...
Armed Conflict Rising Steadily Among Women and Kids >>

Apple and Google are teaming up to allow COVID-19 contact tracing on many of the world's smartphones. The partnership will allow an estimated 3 billion people to opt in to location tracking through Bluetooth on their smartphones for the purposes of combating the coronavirus pandemic.