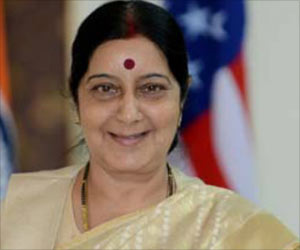 External Affairs Minister Sushma Swaraj undergoes a kidney transplant, according to sources close to the team of doctors constituted to monitor the minister's health.

Among the doctors performing the transplant will be AIIMS director M. C. Misra, V.K Bansal and Sandeep Agarwal -- all prominent surgeons of the country.

External Affairs Minister Swaraj was admitted to AIIMS on November 7 and is being monitored by a team of doctors.
Advertisement
‘The organ for Sushma Swaraj's transplant was being harvested from an unrelated living donor.’
Tweet it Now


According to the hospital authorities, the organ for Sushma Swaraj's transplant was being harvested from an unrelated living donor. The clearance from the authorization committee has been obtained.

Ensuring access to affordable and quality medicines and treatment was an important area of cooperation between India and African countries.
Advertisement
Earlier doctors said that most of the medical procedures required before the transplant such as crossmatch and a series of blood and immunological tests have been completed and found both the recipient and donor fit for the procedure.

Apart from the surgeons, who will be performing the transplant surgery, a team of doctors from other departments have also been constituted to monitor the health of Swaraj -- a severe diabetic.

Earlier the possibility of having Swaraj's daughter as a potential donor was turned down by the doctors as she too was a severe diabetic and a patient of obesity.

Doctors also said that Swaraj was undergoing dialysis whenever required.

On November 16, Swaraj tweeted that she was in AIIMS because of kidney failure.

The 64-year-old, who has been in and out of the hospital for last few months, was admitted to AIIMS on November 7.

Kidney Transplant Using Robots For The First Time In The UK

A robotic kidney transplant has been done in the UK for the first time, signaling a revolution in 'minimally invasive surgery' for end stage renal disease patients.
Advertisement

Paired donor exchange kidney transplantation is a process in which unrelated kidney donors are matched to ...