Food Wrapped in Newspaper is Harmful to Health: FSSAI 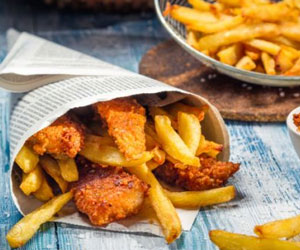 Food, Safety and Standard Authority of India (FSSAI) said that the food items which are wrapped in newspaper have negative effects on health as the ink contains multiple bioactive compounds harming the immune system in the children, teenagers and in adults.

"Wrapping food in newspapers is an unhealthy practice and the consumption of such food is injurious to health, even if the food has been cooked hygienically," said in an advisory, by the FSSAI .


The advisory also said that even paper/cardboard boxes made of recycled paper may be contaminated with harmful chemicals like phthalate which can cause digestive problems and also lead to severe toxicity.

"Older people, teenagers, children and people with compromised vital organs and immune systems are at a greater risk of acquiring cancer-related health complications, if they are exposed to food packed in such material," the advisory warned.

The advisory comes after Health Minister J.P. Nadda's directions to the food regulatory authority against the practice of wrapping and covering food items in newspapers in India.

Speaking in this regard J.P Nadda said: "It has been observed that vendors have been using newspapers in packing and serving food, which is harmful. I urge the public to dissuade the vendors from doing so."

According to the advisory, the Commissioners of Food Safety of all States/Union Territories will initiate systematic campaigns for generating awareness among all the stakeholders to discourage the use of newspapers for packing, serving and storing food items.

National Human Rights Commission Issues Notice To FSSAI Over Rise In Pesticides In Food Items
In the last six years, there has been an almost two-fold increase in the number of samples containing pesticides above the permitted Maximum Residue Level (MRL).
READ MORE

Consumption Of Caffeine and Energy Drinks on a High in India: FSSAI
Food safety experts in India conduct a survey on the consumption pattern of caffeinated beverages and energy drinks across the country.
READ MORE

FSSAI Bans Manufacture, Sale, Distribution and Import of Mulmin Vitamin Drops
Keeping in view the changes made by the company in the Mulmin drops, the FSSAI directed the company to stop manufacturing and sale of drops immediately.
READ MORE

Why Do We Eat - Nutrition FactsDiet Lifestyle and Heart DiseaseHunger Fullness and Weight ControlLabel Lingo on Food Items: DecodedTips for Healthy Fasting During RamadhanTop Diet Foods that Make you FatTop Food for DietersSelenium - Natural Source Better than Supplements
Sign up for Wellness Consult a Doctor Sign up for Selfcare