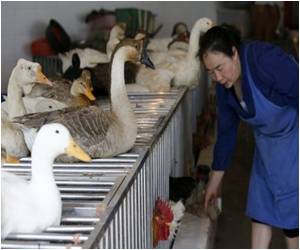 A team of French, British and Vietnamese researchers interviewed vendors at live bird markets in northern Vietnam and tracked how outbreaks could move as if via social network, even into remote areas.

Measures that require mass culling of birds or the shutdown of live bird markets are ineffective, argued the researchers in the US journal the Proceedings of the National Academy of Sciences.


"Instead, disconnecting the market network should be achieved through the daily disinfection of live bird markets and of the vehicles leaving them," said the study.
Advertisement
"Implementing this intervention in only a few hubs would be effective in fragmenting the entire network."

Daily disinfection was shown to reduce the median epidemic size, or the fraction of contaminated markets, by 80 to 89 percent, said the study.

Disinfection every two days was less effective, reducing the media epidemic size by about 30 percent.

The benefits of such a system include low costs and easily collected data about traders' movements, said the study led by Guillaume Fournie of the University of London.

The H5N1 virus has killed more than 370 people around the world, according to the World Health Organization, and scientists fear it could mutate into a form readily transmissible between humans.

China is scrambling to contain a new H7N9 strain that had not previously been transmitted from birds to humans but has killed 27 people this year.

The WHO has said so far there is no evidence of human-to-human transmission but has warned H7N9 is "one of the most lethal" influenza viruses ever seen, and urged travelers against contact with live poultry.