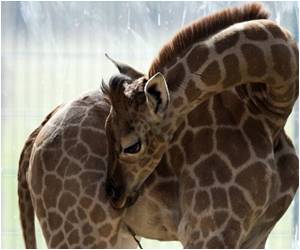 A highly specialized ligament structure identified by the researchers at the Royal Veterinary College is thought to prevent giraffes' legs from collapsing under the immense weight of these animals.

Christ Basu, a PhD student in the Structure and Motion Lab said that giraffes were heavy animals but had unusually skinny limb bones for an animal of this size which means that their leg bones were under high levels of mechanical stress.

It will be easier to import elephants, giraffes, rhinos and all other such non-domestic hoofed animals thanks to the new EU rules that were agreed upon.
Advertisement

The researchers hypothesized that this arrangement may help solve the mystery of how the giraffes' spindly legs could support its weight.


Basu said that he did like to link modern giraffes with fossil specimens to illustrate the process of evolution and they hypothesized that the suspensory ligament had allowed giraffes to reach large sizes that they otherwise would not have been able to achieve.

Daily Calorie Requirements Find a Hospital Noscaphene (Noscapine) Turmeric Powder - Health Benefits, Uses & Side Effects Indian Medical Journals The Essence of Yoga Sanatogen Pregnancy Confirmation Calculator Blood Donation - Recipients Sinopril (2mg) (Lacidipine)
This site uses cookies to deliver our services. By using our site, you acknowledge that you have read and understand our Cookie Policy, Privacy Policy, and our Terms of Use