Smoking in Public Places is Banned in Greece 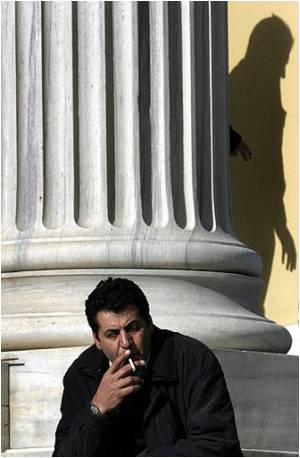 Greek smokers will now need to stop the habit of smoking in public places following the recent legislation on smoking in Europe's most nicotine-addicted nation.

Under the slogan "Stub out your cigarettes, add to your life," the controversial legislation adopted in July 2009 but so far unenforced bans smoking in all public spaces except casinos and large music halls which have a nine-month extension to June.

Violaters faces fines from 50 to 500 euros (64 to 640 dollars) while business operators risk tougher penalties of 500 to 10,000 euros and repeat offenders could have their licenses revoked.


This time the government says it will enforce the measure which Prime Minister Georges Papandreou said would "contribute to our goals ... of making the country more viable, not only economically but in daily life."

Smoking causes many diseases and affects the overall health of smokers.
Advertisement
However Health Minister Mariliza Xenoyannakopoulou said smokers would have a one-month grace period during which they will not face punishment for breaking the new law.

"This is matter of public health, not a witch-hunt," the minister said.

However restaurant and cafe owners have threatened to ignore the new legislation which they said was a threat to trade.

"There is no way I'm turning away customers, I need them more than ever," Yiannis Tsakos, the general secretary of the association of restaurants and entertainment establishments, told state television NET.

Forty percent of Greeks are smokers and go through an average of eight cigarettes per day, Ta Nea daily reported on Monday.

Senior defense sorces fear that Taliban and Al Qaeda terrorists will profit from the growth in cigarette smuggling into the UK if a ban on tobacco advertising is implemented.
Advertisement
Advertisement