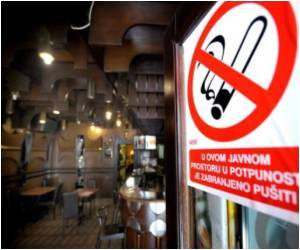 Senior defense sorces fear that Taliban and Al Qaeda terrorists will profit from the growth in cigarette smuggling into the UK if a ban on tobacco advertising is implemented.

One defence source said: "The Taliban will take full advantage of methods to secure money to fund their insurgency against our troops.


"If an opportunity arises, such as an increase in demand for smuggled illicit cigarettes into the UK, their networks will find a way of filling that void," the Daily Express quoted a defence source, as saying.


The ban comes into force for supermarkets in 2011 and for corner shops in 2013.

The law was passed in the last few months of the previous administration, but has been challenged by retailers who say evidence from other countries that a ban stops youngsters smoking is flimsy.

It is feared the ban could even increase youth smoking from illegal sources.

The Sunday Express has launched the "Don't Shutters Down" campaign against the display ban on the grounds that it could lead to the closure of hundreds of community shops.

Cigarette smuggling and the import of contraband tobacco are already becoming more prevalent in the UK.

Fears that the Taliban could benefit from the impending ban are supported by an influential report from the US Center for Public Integrity on the link between Islamic Jihad and cigarette smuggling.