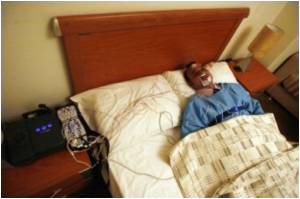 Compared to men without insomnia who slept for six hours or more, men with chronic insomnia who slept for less than six hours were four times more likely to die during the 14-year follow-up period (odds ratio = 4.33). Results were adjusted for potential confounders such as body mass index, smoking status, alcohol use, depression and obstructive sleep apnea. Further adjustments for hypertension and diabetes had little effect on the elevated mortality risk (OR = 4.00). No significant mortality risk was found in women with insomnia and a short sleep duration of less than six hours (OR = 0.36).

"The primary finding of our study is that insomnia, the most common sleep disorder, is associated with significant mortality in men," said principal investigator Alexandros N. Vgontzas, MD, professor of psychiatry in the Department of Psychiatry at Penn State College of Medicine and Hershey Medical Center in Hershey, Pa. "Until now no study has demonstrated that insomnia is associated with mortality. Our different results are based on our novel approach to define insomnia both on a subjective complaint and the objective physiological marker of short sleep duration measured in the sleep lab."


The study involved 1,000 women with a mean age of 47 years and 741 men with an average age of 50 years. They provided a comprehensive sleep history, received a physical exam and had their sleep evaluated during one night in a sleep laboratory. Sleep duration was measured objectively by polysomnography, and the presence of chronic insomnia was defined by a complaint of insomnia with a duration of at least one year. Eight percent of women and four percent of men had chronic insomnia with a sleep duration of less than six hours.
Advertisement
After about 10 years of follow-up for women and 14 years for men, 248 participants (14 percent) were deceased. The 14-year adjusted mortality rate for men was 9.1 percent for "good sleepers" and 51.1 percent for insomniacs who slept less than six hours.

Previously published studies based on the same cohort also have shown that chronic insomnia with short sleep duration is associated with deficits in neurocognitive function and increased risks of both type 2 diabetes and hypertension.

"We believe that cumulatively these findings will increase the awareness among physicians and scientists that insomnia should be diagnosed early and treated appropriately," said Vgontzas.

The current study also found an even higher risk of death when men with chronic insomnia and a short sleep duration also had hypertension or diabetes. Insomniacs who slept less than six hours and were diabetic or hypertensive at baseline had a much higher mortality risk (OR = 7.17) than short-sleeping insomniacs without diabetes or hypertension at baseline (OR = 1.45). According to the authors, this suggests that the treatment of insomnia in people with impaired physical health should be a medical priority.

The authors cautioned that six hours of sleep is not recommended as the optimum sleep duration for the general population. They used a six-hour cut-off point only for the statistical evaluation of the severity of insomnia. The American Academy of Sleep Medicine reports that most adults need seven to eight hours of nightly sleep to feel alert and well rested during the day.

The authors also noted that it is unclear why the mortality risk was increased in men but not in women. One explanation may be that the mean follow-up duration was 3.6 years shorter for women than for men, and the sample of women had fewer deaths (103) than the men (145).

Source: Eurekalert
Advertisement
<< Smoking in Public Places is Banned in Greece
The Population of Singapore Has Crossed Five Million >>

Insomnia
Difficulty in initiating and maintaining sleep is known as insomnia. It is a symptom that occurs ......