Small, Flexible Device Could Power a Pacemaker with Energy from Heartbeat 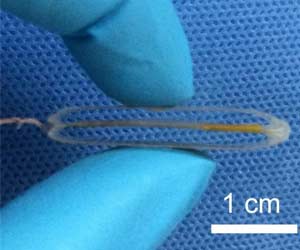 New study moves one step closer towards making a self-powered heart pacemaker. Scientists have discovered a small, flexible device that can power a pacemaker with energy from heartbeats. The findings of the study are published in the journal ACS Nano.

Implantable pacemakers have without doubt altered modern medicine, saving countless lives by regulating heart rhythm. But they have one serious shortcoming: Their batteries last only five to 12 years, at which point they have to be replaced surgically. Now, researchers have surmounted this issue by designing a pacemaker powered by the energy of heartbeats, according to a report. The device was successfully tested in pigs, which have similar physiology to humans.

A conventional pacemaker is implanted just under the skin near the collarbone. Its battery and circuitry generate electrical signals that are delivered to the heart via implanted electrodes. Because surgery to replace the battery can lead to complications, including infection and bleeding, various researchers have tried to build pacemakers that use the natural energy of heartbeats as an alternative energy source. However, these experimental devices aren't powerful enough because of their rigid structure, difficulties with miniaturization and other drawbacks, so Hao Zhang, Bin Yang, and colleagues searched for ways to improve the technology.


First, they designed a small, flexible plastic frame. Next, they bonded the frame to piezoelectric layers, which generate energy when bent. They implanted the device in pigs and showed that a beating heart could, in fact, alter the frame's shape, generating enough power to match the performance of a battery-powered pacemaker. The study is a step toward making a self-powered cardiac pacemaker, the researchers say.

Worlds Smallest Pacemaker Implanted For Regularizing Heart Rate
Micra Transcatheter Pacing System is small enough to be delivered through a catheter and implanted ....

New Leadless Pacemakers for Heart Patients
A new leadless pacemaker has been developed for heart patients, which has no wires, less invasive .....

Atrial Fibrillation
Atrial fibrillation may not be life-threatening in itself but it is important to understand the caus...