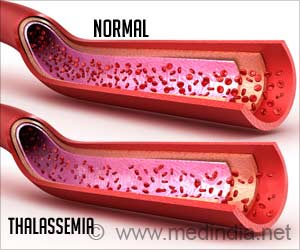 Expert said increased public awareness about the Thalassemia blood disease is now a challenge for the government to set up testing centres in remote areas of the country.

"In India, or say Kolkata, HPLC (High-Performance Liquid Chromatography) test is not available in remote places," Thalassemia Society of India Secretary Utpal Panda told IANS on the sidelines of a talk show 'Red Alert-Thalassaemia' at the American Center here.

Advertisement
‘India is virtually the Thalassemia capital of the world with 40 million carriers already, and 10,000 more added annually.’

Thalassemia is passed down the families (inherited), in which the body makes an abnormal form of haemoglobin -- the protein in red blood cells that carries oxygen.


The disorder results in destruction of a large numbers of red blood cells, triggering anaemia. Thalassemia occurs when there is a defect in a gene that helps control production of proteins Alpha globin or Beta globin.
Advertisement
Experts forbid marriage between two persons with carrier genes of Thalassaemia since there is a high chance of passing on the disease to the offsprings.

Asked if people are actually getting pre-marital Thalassemia test done and asking each other if he/she is a carrier of the disease, Panda said: "To an extent, yes. They are asking now. As you make them more aware, they are scared.

"But sometimes, getting out of family taboo becomes difficult. In some communities, it is a no-no thing," he added.

The Thalassaemia patients can lead a normal life with safe blood transfusion. The genetic disorder can be prevented with awareness and prior detection.

"Blood transfusion has to be arranged every two to three weeks. The blood that saves their lives also creates iron overload in their system. Unless that iron is chelated out it creates a lot of problems," Panda said.

New drugs, which are expected to make life easy for Thalassemia patients, are undergoing clinical trials.

"We are all eagerly waiting for a drug that is in an advanced stage of clinical trial in America. This particular drug is supposed to increase the time gap in blood transfusions.

"If the drug passes the trials successfully, the present time gap of 15 days between two transfusions can be increased to three months," said Panda.

"There is another drug that is in the advanced stage of clinical trial, which once approved and launched, for clearing the body of iron," he said.

Test Your Knowledge on Thalassemia
Thalassemia is one of the several inherited disorders of hemoglobin synthesis and marked by varying ...

Indias Struggle With Thalassemia: Can Only Gene Therapy Offer Complete Cure?
The life and struggle of a person who suffers from beta thalassemia major, a rare genetic blood ......