CRISPR-based treatment (genome surgery) was found to restore retinal function in mice afflicted by retinitis pigmentosa, found study published in the journal of the American Academy of Ophthalmology.

This is the first time researchers have successfully applied CRISPR technology to a type of inherited disease known as a dominant disorder. This same tool might work in hundreds of diseases, including Huntington's disease, Marfan syndrome, and corneal dystrophies. Their study was published online today in Ophthalmology, the journal of the American Academy of Ophthalmology.

Stephen H. Tsang, M.D., Ph.D., and his colleagues sought to create a more agile CRISPR tool so it can treat more patients, regardless of their individual genetic profile. Dr. Tsang calls the technique genome surgery because it cuts out the bad gene and replaces it with a normal, functioning gene. Dr. Tsang said he expects human trials to begin in three years. "Genome surgery is coming," Dr. Tsang said. "Ophthalmology will be the first to see genome surgery before the rest of medicine." Retinitis pigmentosa is a group of rare inherited genetic disorders caused by one of more than 70 genes. It involves the breakdown and loss of cells in the retina, the light sensitive tissue that lines the back of the eye. It typically strikes in childhood and progresses slowly, affecting peripheral vision and the ability to see at night. Most will lose much of their sight by early adulthood and become legally blind by age 40. There is no cure. It is estimated to affect roughly 1 in 4,000 people worldwide.


Since it was introduced in 2012, the gene editing technology known as CRISPR (Clustered Regularly Interspaced Short Palindromic Repeats) has revolutionized the speed and scope with which scientists can modify the DNA of living cells. Scientists have used it on a wide range of applications, from engineering plants (seedless tomatoes) to producing animals (extra lean piglets). But as incredible as genome surgery is, CRISPR has some flaws to overcome before it can live up to its hype of curing disease in humans by simply cutting out bad genes and sewing in good ones. Diseases like autosomal dominant retinitis pigmentosa present a special challenge to researchers. In autosomal dominant disorders, the person inherits only one copy of a mutated gene from their parents and one normal gene on a pair of autosomal chromosomes. So, the challenge for CRISPR-wielding scientists is to edit only the mutant copy without altering the healthy one.

In contrast, people with autosomal recessive disorders inherit two copies of the mutant gene. When two copies of the gene are mutated, treatment involves a more straightforward, one-step approach of simply replacing the defective gene. Currently, there are six pharmaceutical firms pursuing gene therapies for the recessive form of retinitis pigmentosa; none are developing a therapy for the dominant form. But that may change soon. That's because Dr. Tsang and colleagues have come up with a better strategy to treat autosomal dominant disease. It allowed them to cut out the old gene and replace it with a good gene, without affecting its normal function. This so called "ablate-and-replace" strategy can be used to develop CRISPR toolsets for all types of mutations that reside in the same gene and is not exclusive for a type of mutation. This is especially helpful when many types of mutations can lead to the same disorder. For example, any one of the 150 mutations in the rhodopsin gene can result in retinitis pigmentosa. Because Dr. Tsang's technique can be applied in a mutation-independent manner, it represents a faster and less expensive strategy for overcoming the difficulty of treating dominant disorders with genome surgery.

Typically, CRISPR researchers design a short sequence of code called guide RNA that matches the bit they want to replace. They attach the guide RNA to a protein called Cas9, and together they roam the cell's nucleus until they find a matching piece of DNA. Cas9 unzips the DNA and pushes in the guide RNA. It then snips out the bad code and coaxes the cell to accept the good code, using the cell's natural gene repair machinery. Instead of using one guide RNA, Dr. Tsang designed two guide RNAs to treat autosomal dominant retinitis pigmentosa caused by variations in the rhodopsin gene. Rhodopsin is an important therapeutic target because mutations in it cause about 30 percent of autosomal dominant retinitis pigmentosa and 15 percent of all inherited retinal dystrophies.

This technique allowed for a larger deletion of genetic code that permanently destroyed the targeted gene. Dr. Tsang found that using two guide RNAs instead of one increased the chance of disrupting the bad gene from 30 percent to 90 percent. They combined this genome surgery tool with a gene replacement technique using an adeno-associated virus to carry a healthy version of the gene into the retina. Another advantage is that this technique can be used in non-dividing cells, which means that it could enable gene therapies that focus on nondividing adult cells, such as cells of the eye, brain, or heart. Up until now, CRISPR has been applied more efficiently in dividing cells than non-dividing cells. Dr. Tsang used an objective vision test to evaluate the mice after treatment to show a significant improvement in retinal function. An electroretinogram is typically used to evaluate retinal health in humans. It tests the health of the retina much like an electrocardiogram (EKG) tests the health of the heart.

Previous CRISPR studies for retinal diseases have relied on a less objective measure that involves evaluating how often the mouse turns its head in the direction of a light source. Dr. Tsang used electroretinography to show that retinal degeneration slowed in treated eyes compared with untreated eyes. 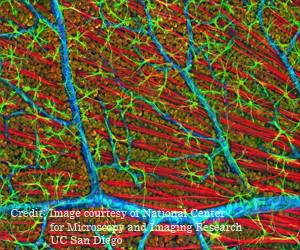 New Retinal Nano-Implant May Help Restore Vision
The new type of retinal prosthesis uses nanotechnology and wireless electronics to restoring the ability of neurons in the retina to respond to light.
READ MORE

Bietti Crystalline Dystrophy
Bietti crystalline dystrophy is a condition in which lipid deposits accumulate in the retinal tissues of the eye leading to progressive loss of vision.
READ MORE