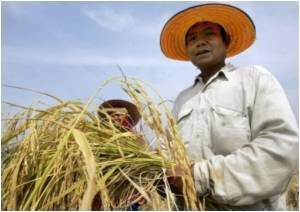 Cadmium, a chemical element which can be highly toxic to the human body was found in 10% of the rice available in China, according to a recent survey.

Most of the rice plantations in China appeared to be contaminated with abnormal levels of cadmium.

Li Wenxiang, citizen of Sidi village in the Guangxi Zhuang Autonomous Region who has been consuming this rice for more than two decades is suffering from pain in the legs and feet.


A survey conducted by the Ministry of Agriculture in 2002 showed that 28.4 percent of the surveyed rice was polluted with lead and cadmium. Copper, Zinc, lead and arsenic were also found in rice plantations across the nation.