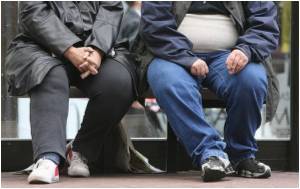 People who are obese face higher risk of dying from a heart attack, irrespective of whether or not they have other known risk factors for cardiovascular disease.

Increasing weight is associated with a higher prevalence of known risk factors for coronary artery disease, such as diabetes, high blood pressure and cholesterol. And it has been assumed that these have been responsible for the increased risk of heart disease seen in obesity, say the authors.

The research team tracked the health of more than 6,000 middle aged men with high cholesterol, but no history of diabetes or cardiovascular disease, for around 15 years.


After excluding men who had cardiovascular problems or died within two years of the start of monitoring, to correct for any bias, 214 deaths and 1,027 non-fatal heart attacks/strokes occurred during the whole period.

One simply corrected for any differences in the age or smoking status of the men, while the second corrected for cardiovascular risk factors such as high cholesterol and blood pressure, deprivation and any medications the men were taking.

Not unexpectedly, the results showed that the higher a man's weight, the higher was his likelihood of having other risk factors for cardiovascular disease. And there was no increased risk of a non-fatal heart attack with increasing BMI, (when using either approach)

In the model simply correcting for age and smoking, this risk was 75% higher. And despite correcting for known cardiovascular risk factors, medication, and deprivation in the second model, the risk was still 60% higher.

Inflammation is a strong factor in fatal cardiovascular disease, and obesity is increasingly being recognised as an inflammatory state, which may partly explain how obesity is linked to heart disease, say the authors. This has implications for treatment and prevention, they add.

In an accompanying podcast, which expands on the findings, lead author Dr Jennifer Logue, of the British Heart Foundation Cardiovascular Research Centre, at the University of Glasgow, cautions that the number of obese men in the sample was small, so the results need to be replicated elsewhere.

But she says, this is mainly because when the study started 20 years ago, the prevalence of obesity was low. But all that has now changed.

"The obesity generation is coming of age. We are going to see more and more complications from obesity, and coming at an earlier age," she warns.

Heart attack can cause symptoms such as Chest pain or discomfort, Shortness of breath and pain in neck, back, arm, or shoulder and is due to blockage of blood supply to the heart muscles
Advertisement
Advertisement