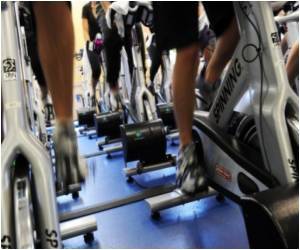 Portable exercise bike which can be used while working at desks could curb the harmful effects of office-related chair disease, suggests a study published by British Journal of Sports Medicine.

The researchers base their findings on 18 full time employees who were given a pedal exercise machine for four weeks, specifically designed to be used while seated at a desk in the workplace.

The mini exercise bike comprised a set of pedals that can be set up in front of most standard office chairs for use while seated, and which makes very little noise. Several such devices are now commercially available, say the authors.


The average age of the participants was 40. Most were female and overweight. All had sedentary jobs, which involved spending at least 75% of the working day sitting at a desk or workstation.

Heart disease can be of many types depending upon whether they involve the heart muscles or artery walls or heart beats. Bad lifestyle choices contribute to heart disease.
Advertisement
The volunteers were wired up to an exercise tracking device via their computers, which monitored their activity and provided real time feedback on pedal speed, distance covered, and how many calories they burned.

Distance covered per day ranged from a third of a mile to almost 13.5 miles, with 9 to more than 500 calories burned in the process.

At the end of the four weeks, all participants completed a questionnaire about the feasibility of introducing a similar machine into the workplace.

The volunteers said they found the machine easy to use and an alternative to exercise during bad weather.

They overwhelmingly said they would use such a machine regularly at work if offered one by their employer and said that it had not affected either their productivity or the quality of their work.

The results showed that the novelty of the device seemed to wear off over time, but the authors say this is not surprising in a group of predominantly sedentary people who were not part of any behavioural intervention.

But participants did maintain the level and intensity of activity over the four weeks, and just 23 minutes of pedalling could boost health if done regularly, the authors say.

As the machine is relatively inexpensive, and seems acceptable to employees, if combined with evidence based behavioural approaches, it offers the potential to be used in large scale workplace health programmes, they conclude.

Simple and practically possible lifestyle changes can make a huge difference in improving our health status without actually putting much effort.
Advertisement
Advertisement