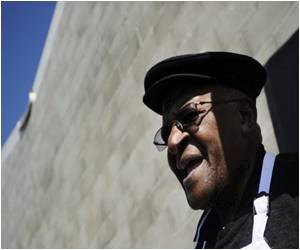 "It is like a breath of fresh air," said Tutu on the apartheid-era prison Robben Island, where the UNAIDS High Level Commission on HIV Prevention was meeting.

Under former president Thabo Mbeki, South Africa's government had openly questioned the causes of AIDS. His health minister Manto Tshabalala-Msimang had promoted garlic and beetroot instead of medication.


But now one million people are receiving anti-AIDS drugs in South Africa, which has the world's most HIV infections, affecting 5.6 million of the 50-million population, according to UN estimates.

Do you know that there are symptoms for each stage of HIV/AIDS? Learn more from our HIV Symptom Quiz but here's a disclaimer - never go by symptoms alone. Symptoms only indicate the progression of the disease, while only a medical test can confirm it.
Advertisement
The country has also rolled out massive testing and prevention drives, including male circumcision and testing in schools.

The meeting at Robben Island was meant to be a symbolic passing of the torch from an older generation of activists to younger people who were brought to meet Tutu and others fighting to stop the disease.