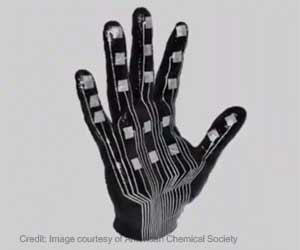 A flexible electronic skin can be used for a variety of human-machine interactions, reports a new study. The findings of the study are published in the journal ACS Applied Materials & Interfaces.

Human skin contains sensitive nerve cells that detect pressure, temperature and other sensations that allow tactile interactions with the environment. To help robots and prosthetic devices attain these abilities, scientists are trying to develop electronic skins. Now researchers report a new method that creates an ultrathin, stretchable electronic skin, which could be used for a variety of human-machine interactions.

Electronic skin could be used for many applications, including prosthetic devices, wearable health monitors, robotics and virtual reality. A major challenge is transferring ultrathin electrical circuits onto complex 3D surfaces and then having the electronics be bendable and stretchable enough to allow movement. Some scientists have developed flexible "electronic tattoos" for this purpose, but their production is typically slow, expensive and requires clean-room fabrication methods such as photolithography.


Mahmoud Tavakoli, Carmel Majidi and colleagues wanted to develop a fast, simple and inexpensive method for producing thin-film circuits with integrated microelectronics.
Advertisement
In the new approach, the researchers patterned a circuit template onto a sheet of transfer tattoo paper with an ordinary desktop laser printer. They then coated the template with silver paste, which adhered only to the printed toner ink. On top of the silver paste, the team deposited a gallium-indium liquid metal alloy that increased the electrical conductivity and flexibility of the circuit. Finally, they added external electronics, such as microchips, with a conductive "glue" made of vertically aligned magnetic particles embedded in a polyvinyl alcohol gel.

The research team transferred the electronic tattoo to various objects and demonstrated several applications of the new method, such as controlling a robot prosthetic arm, monitoring human skeletal muscle activity and incorporating proximity sensors into a 3D model of a hand.

'Electronic Skin' - The Latest on Research
Skin is the largest organ in the body and communicates even the most subtle touch. This helps in ......

Ultrathin Electronic Skin to Measure Heart Rate and Blood Oxygen Level
The e-skin measures the blood oxygen level when stuck on a finger. It contains microelectronic ......