Written by Amrita Surendranath
Medically Reviewed by The Medindia Medical Review Team on February 14, 2016 at 2:38 PM 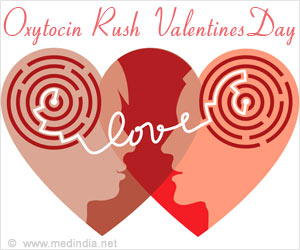 Valentine's day sees a rush of mushy cards, red roses, heart shaped chocolates all due to the rush of oxytocin. Oxytocin, named the love hormone , has found to improve relationships, according to extensive research studies.

Positives in Oxytocin:
1. Bonds mother and newborn child - The level of oxytocin increases during breastfeeding and this is said to bond mothers with new born babies.
2. It is also involved in inducing labor among pregnant women.
3. Couples who had better relationships had higher levels of oxytocin.

Bizarre Traditions Followed on Valentine's Day Across the World
Bizarre valentine''s day celebration from around the world, more than a bunch of red roses.
Advertisement
‘Valentines day celebrations increase release of oxytocin, the love hormone that aids in bonding relationships.’
Tweet it Now

Julianne Holt-Lunstad , Wendy C. Birmingham and Kathleen C. Light in their paper titled "Relationship quality and oxytocin: Influence of stable and modifiable aspects of relationships" study 34 young married couples to understand the effect of oxytocin. Out of these, 20 couples were included in the intervention group while the other 14 couples were in the control group.

Love Hormone and Falling in Love
Why do we fall in love? Is love instinctive? Can we pin this life-altering emotion to a play of chemicals and hormones in the body? Discover what makes for the inextricable bonding of love and life.
Advertisement
a) Touch

b) Understanding the mood and state of the spouse

2) Audio recordings were provided to the participants to follow this procedure at home.

3) Videos for head, neck and shoulder massages were also provided.

Control group couples were asked to continue with their normal routine without changing anything. They were asked to record their mood during the course of the period on a daily basis.

The level of oxytocin was tested at regular intervals in both the control group as well as the group on intervention.

Findings of the Study:

The intervention strategies were mainly designed to induce touch therapy and improve couple time and bonding. The findings prove that couples who enjoyed marital bliss had higher levels of oxytocin and were subsequently happier as individuals.

The study provides conclusive evidence that couples who expressed their affection towards each other were more likely to have a harmonious relationship due to the secretion of oxytocin that aids in bonding. It is little wonder why this hormone is called the love hormone. Some farmers were found to inject their crops with oxytocin to aid in growth!

Valentine's day creates a rush for ways to make a loved one's life and day extremely special. This constant blurry of activity focusing on the likes and dislikes of a special someone increases the level of oxytocin in the blood. This could lead to stronger relationships and happier couples.

A mystifying is a nasal spray of oxytocin that has found to lower calories intake in men. Though there is increased talk about oxytocin levels nearing Valentine's day, with seldom discussion after that. What is required is a concerted effort to make a relationship work by focusing on spending quality time with your loved one, benefiting from the heightened secretion of oxytocin.

The 'Love Hormone' Oxytocin Closely Mimics Effects of Marijuana
Social contact increased production of anandamide in the nucleus accumbens, which triggered cannabinoid receptors there to reinforce the pleasure of socialization.

Evolutionarily, decoding the biological substrate of romantic love has been an enduring enigma of science. A ...

What are happy hormones? Happy hormones are chemical messengers present in the brain that promote positive ...

The labor pain or pain of childbirth is considered as the one of the most severe types of pain. It was in the ...

A phobia is an irrational and exaggerated fear of an object or a situation that in reality, poses little or ...

Love plays a crucial role in our mental health. Love that comes from a friend, a partner, a sibling, or a ...
This site uses cookies to deliver our services.By using our site, you acknowledge that you have read and understand our Cookie Policy, Privacy Policy, and our Terms of Use  Ok, Got it. Close
×