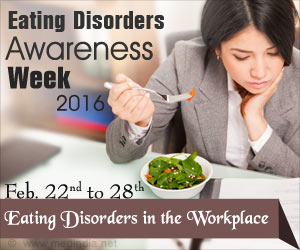 "Food is the most abused anxiety drug. Exercise is the most under utilized antidepressant." - Bill Phillips
Eating disorders are serious illnesses that can cause severe disturbances to a person's eating behaviors. Obsessions with food, body weight and shape are the signs of an eating disorder that can have a negative impact on the physical and mental health.


The common eating disorders are anorexia nervosa, bulimia nervosa, binge eating disorder and Other Specified Feeding and Eating Disorders (OSFED). Some of the causes of eating disorders are depression, low self-esteem, concern about body shape and size, fear of weight gain, desire to imitate role models, and overcoming disappointments. Eating disorders are not just about food and body weight. It also involves emotional and stress-related issues. A person with an eating disorder uses food to deal with uncomfortable or painful emotions. Food restriction is used to feel in control. Purging is used to combat the feelings of helplessness. Overeating may temporarily alleviate sadness, anger, or loneliness.


‘A person with an eating disorder should not be forced to change at once. Offering support and encouragement with professional help can make a huge difference.’

People with anorexia nervosa starve themselves out of fear of becoming fat. Despite being underweight, they assume they are overweight. Individuals with anorexia control their weight with exercise, diet pills, or purging. The condition usually develops around the age of 16 or 17. One in 250 women and 1 in 2,000 men suffer from anorexia at some point in their life.

It is a destructive cycle of bingeing and purging. Following an episode of uncontrollable binge eating, people with bulimia take extreme steps to purge themselves of the extra calories. To avoid weight gain, they vomit, use laxatives, exercise or fast. Bulimia is two to three times more common than anorexia nervosa. It is often more likely to develop at the age of 18 or 19. About 90 percent of people with bulimia are women.

People with binge eating disorder overeat and consume thousands of calories in a short period. Despite feelings of guilt over these secret binges, they feel unable to control their behavior or stop eating even when uncomfortably full. Binge eating is more commonly reported among older adults between the ages of 30 or 40. The condition is widespread, and it is estimated to affect 5% of the adult population.

Eating disorders have the highest mortality rate of any mental disorder. According to statistics, one-in-five people between the ages of 15 and 24 years with an eating disorder die due to starvation or suicide. Eating disorder is not an issue of teenagers; it can affect people throughout the lifespan. However, the condition is more common in women than men. Claire Mysko, CEO of the National Eating Disorders Association, said, "Eating disorders can affect people of all body weights, age groups, races, ethnicities, and genders."

According to a study published in the International Journal of Eating Disorders in 2012, about 70 percent of women aged 50 or older are trying to lose weight. Sixty percent reported that their concerns about body image and weight had an impact on their lives, and 13 percent showed signs and symptoms of an eating disorder, such as extreme dieting, binge eating, and excessive exercise.

Although eating disorders are less common in older adults than in teenagers, the symptoms remain the same and have a devastating impact on a person's quality of life.

Adults with an eating disorder are more likely to suffer from complications such as osteoporosis, tooth loss, gastrointestinal and cardiac problems. The signs and symptoms of an eating disorder may be similar to both teenagers and adults, but the triggers and concerns are different. The triggers for teenagers are body size and shape, but older adults with eating disorders are concerned about the signs of aging, such as wrinkles, body shape changes, and loose skin.

Early Detection and Intervention is the Key

Treatment for an eating disorder varies from one person to another. Counseling and behavioral therapy are very effective for some, whereas others may need medications, such as antipsychotics and antidepressants. For some people, a combination of both therapy and medications are necessary for recovery.

Eating Disorders in the Workplace

Eating disorder can have an impact on an individual's everyday life if it is left untreated. It can take a toll on the work productivity and also affect the relationships with employers and other coworkers. Most of the people may have a stressful environment at work. Stress can be a trigger for developing an eating disorder. Raising awareness of the signs and symptoms of eating disorders will enable employers and coworkers to address the concerns with employees, helping them to seek treatment.

Helping Someone with an Eating Disorder

Recognizing the signs of eating disorders, family, friends and colleagues can help an individual towards recovery. Some of the signs that someone is struggling with an eating disorder include: After noticing the warning signs of the disorder in a person, choose a comfortable and safe environment such as, at home. The person may be experiencing high levels of anxiety, shame, embarrassment, and guilt. Be prepared to deal with the person if they respond with anger or denial.

Communicate in a non-confrontational way, encourage them to express their feelings and listen respectfully. Do not criticize or judge, but be sincere and direct while discussing the concerns. Do not take the role of a therapist, encourage the person to seek professional help and offer support for each step of the way.

Eating Disorder Treatment is a Combo of Counseling, Medications, Support
Eating disorders are caused by either eating too little, or too much, or trying out harmful means to lose weight; it requires immediate treatment and counseling.
READ MORE