Swallowing an oral capsule may help to control a serious bleeding disorder like hemophilia, finds a new study from the University of Texas at Austin's Institute of Biomaterials, Drug Delivery, and Regenerative Medicine.

The research study is published in the International Journal of Pharmaceutics.
Oral Pill Shows New Hope For Hemophilia Treatment

The research team funded by the National Institute of Biomedical Imaging and Bioengineering, are working towards developing a new pill for individuals with type B hemophilia, instead of using several injections of factor IX for treatment.


‘Oral capsule with a protective polymer may help to treat hemophilia.’


Hemophilia is a rare genetic disorder that occurs when there are insufficient clotting factors. It is caused due to the mutation in the factor IX gene. Symptoms include bruising, nosebleed, bleeding in the urinary tract and the joints.

David Rampulla, Ph.D., Director of the NIBIB Program in Delivery Systems and Devices for Drugs and Biologics, said, "The problem with oral delivery is the need to protect proteins such as factor IX in the acidic environment of the stomach but then release them when they reach the small intestine. This is an extraordinary challenge and the Peppas group has spent years developing innovative polymer shells capable of shuttling the protein to its final destination in the digestive tract."

Nicholas Peppas, Professor of Biomedical Engineering, Chemical Engineering and Medicine, said, "Multiple weekly injections of factor IX is very difficult for the boys who need the clotting factor to avoid potentially fatal bleeding episodes, as well as for their families"

"However, in working with these families, we soon learned that there was also an emotionally draining aspect for mothers, who carry the burden that they passed this disorder on to their sons. This has added an urgency to our research because we know that oral administration of factor IX would be a great relief for these families."

Protective Polymer Capsule to Treat Hemophilia
Swallowing the factor IX protein may quickly digest the stomach acids and lose its clotting factor activity. The research team designed a capsule with a protective polymer that can change itself to the environment of gastro-intestinal tract.

The polymer is developed in such a way that it is impermeable to the stomach acids like pepsin as they are capable of digesting the factor IX protein. It then reaches the small intestine which contains trypsin. In the small intestine, the polymer is designed to degrade with trypsin, by allowing the intestinal fluids to swell the capsule. When the capsule degrades, clotting factor may be released for the absorption into the bloodstream.

Benefits of the Newly Designed Capsule
Further research is required to test the capsule's effect in animals followed by human clinical trials for FDA approval.

Hemophilia is a bleeding disorder that prevents the clotting of blood. There are two types of Hemophilia namely Hemophilia A and Hemophilia B.

Hemophilia A occurs due to the defective factor VIII and Hemophilia B occurs in boys who have a defective Factor IX protein on the X chromosome that is received from their mother. 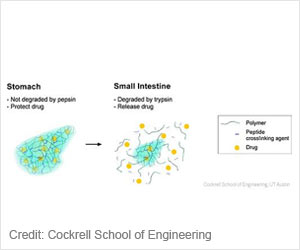 New Capsule Found to Treat Hemophilia
Hemophilia is a bleeding disorder that occurs due to the absence of a clotting protein. Capsules show new hope for hemophilia treatment, reveals study.
READ MORE